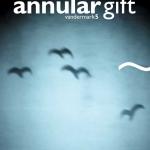 The Vandermark 5's Annular Gift is its most accessible and swinging recording to date. Recorded live (one reason) in Krakow, Poland, the quintet has come together (reason two) as a true aggregate of players.

This is their fifteenth official release (there have been some CD-Rs and compilation discs) and third for the Polish label Not Two. The others were the sprawling and ultimately satisfying 12-CD collection of live dates at Alchemia in 2004 (since Alchemia, cellist Fred Lonberg-Holm replaced trombonist Jeb Bishop in V5) and a double-LP, Four Sides Of The Story (2006).

Lonberg-Holm's voice has influenced the group since his inclusion on The Discontinuous Line (Atavistic, 2006), and the previous Beat Reader (Atavistic, 2008). From the opening "Spiel," an expanded Vandermark composition, he extends his cello technique into a world once inhabited by Jimi Hendrix. Later, in duo with Kent Kessler on "Second Marker," his electronics boost the dynamic bassist's solo. Their pairing evokes memories of John Coltrane's experimentations with two drummers.

But these interactions are but just pieces and parts of the whole. Vandermark writes intricate and challenging music for this ensemble that is likely to change rhythm and direction several times within a song. The ballad "Early Color" opens with a quiet grace, winds through a blue interlude, only to end in a full frontal attack of horns.

"Cement" opens with an inspired solo by drummer Tim Daisy to the crowd's delight, before the funky horns and Lonberg-Holm's pinging electronics chime in. The disc ends with "Cadmium Orange," a restless and somewhat spasmodic piece that finds Vandermark exercising his clarinet, before the piece resolves itself with what can be considered a V5 signature interlocking horn section. The saxophone combination of Vandermark and Dave Rempis is an enduring display of horsepower and bridges the worlds of jazz and rock with dramatic results.

Annular Gift just might be the finest offering by this longstanding ensemble.