By ROGER FARBEY
February 4, 2018
Sign in to view read count 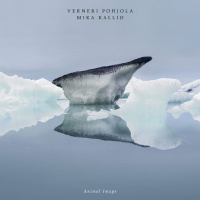 Animal Image is the remarkable soundtrack for the documentary film of the same name by the Finnish visual artist Perttu Saksa. Although the movie's duration is twenty eight minutes, the score composed and recorded by fellow Finns Verneri Pohjola and Mika Kallio actually runs to just north of thirty seven minutes, but any shorter would have cheated the listener of some compelling music. The deceptively tranquil Zen-like opening number, "Where Do You Feel At Home" belies some of the captivating and more visceral music that ensues.

Pohjola stretches elongated plaintive trumpet notes on "Outside" whereas his unbridled open trumpet soars into the stratosphere on "Foxplay" in a hypnotic solo accompanied only by sparse drums and cymbals. The droning electronics and repeated single drumbeat of "Man" paint an eerie, ominous soundscape over which Pohjola plays a desolate melody. Pohjola conjures up animalistic sounds of screeching and squawking on "Goshawk's Dream" which plays like a collective improvisation. On the title track finale, Kallio deploys deep reverberating gongs alongside tiny high pitched cymbals and whale-like percussive cries; Pohjola plays against this background with multi-tracked trumpet creating both drones and evanescent melodies.

Since graduating with a music Master's degree in 2002, Mika Kallio has worked with a whole host of musicians including Tomasz Stanko, Wadada Leo Smith, John Zorn, the UMO Jazz Orchestra and also Verneri Pohjola's late father, Pekka. This is Verneri Pohjola's third album for Edition Records, following on from Bullhorn (2015) and Pekka (2017). Worlds apart from these two albums, Animal Image does command a different set of listening skills. However, succumbing to concentration and contemplation yields for the listener a meditative and curiously addictive atmosphere. As the YouTube clip accompanying this review teasingly attests, to hear this sound poem in conjunction with the mesmeric black and white visual imagery portrayed in Saksa's film would truly be something else.

Where Do You Feel At Home; Outside; Foxplay; Man, Animal Image; Goshawk’s Dream; Animal Image.