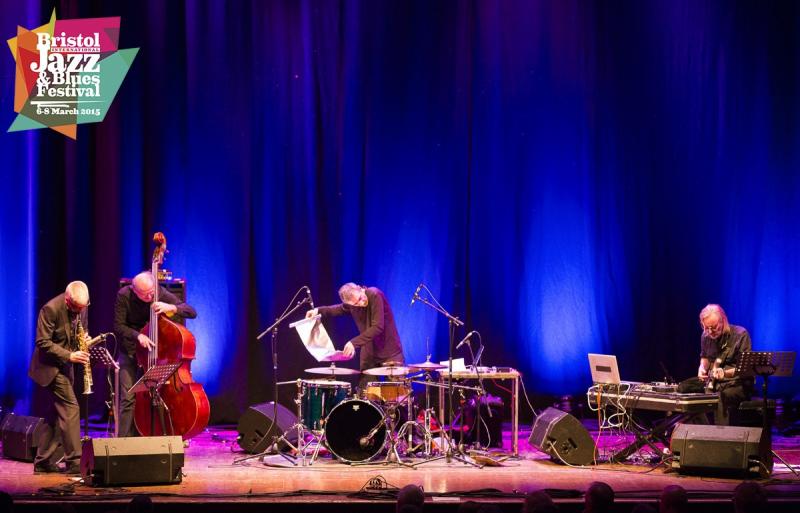 A "local hero" is how the emcee described saxophonist/composer Andy Sheppard. Bristol resident Sheppard is neither immortal nor a demi-God, but he is uber-talented and a warrior of sorts; a road warrior who has clocked up more miles than the Vikings ever did, purveying his music the length and breadth of the UK these past forty years. And the warm reception the Colston Hall crowd accorded Sheppard as he took to the stage was a sign of its appreciation, mingled with excitement at the prospect of new music.

This concert was the UK premiere of Surrounded by Sea—Sheppard's forthcoming release for the storied ECM label—and it was accompanied by a distinct lack of marketing hullabaloo. The CD title was barely mentioned and Sheppard only introduced a couple of the new songs by name during the course of the gig. Refreshingly enough, Sheppard and his new quartet let the music speak for itself.

Michel Benita's striking bass ostinato and Michele Rabbia's rising-falling waves of percussion coursed through the opening number, with Eivind Aarset's electric guitar/effects an atmospheric foil to Sheppard's melodious tenor lines. It was the blueprint for much of the evening's music, which unfolded with a serene, suite-like continuity.

On soprano, Sheppard moved between lulling balladry and ghostly, folksy ruminations of subtly shifting rhythmic dynamics. Benita's quietly beguiling bass served as extended intro and spine to one of the more robust numbers, where Aarset's spare notes sparkled against Sheppard's dominant tenor curtain. Tenor and guitar together forged dreamy lines on "Medication," with percussion drifting in and out of the soundscape.

Rabbia was filling in for the unavailable Sebastian Rochford and had only rehearsed with the band for the first time that morning. Though Rabbia and Sheppard had previously played together as a duo, it was a different story stepping into an intricately spun quartet narrative and he did a remarkable job. The Italian was an energetic presence—even in the more serene passages—animating the music with a constantly rotating array of percussive colors.

Occasionally Rabbia forewent hands and various brushes to cut loose on sticks, notably on a start-stop tenor-cum-guitar driven number that coupled lyricism with rumbling intensity, and on an effects-heavy ambient piece steered by Aarset. Such angular/abstract forays were rare and all the more effective for it. In the main, however, the music followed a melodic, lyrical and beautifully understated curve over the course of seventy minutes. An impromptu Brazilian folk tune of caressing tenderness—a source of inspiration that Sheppard returns to time and again—closed the set.

Melody has long been Sheppard's lingua franca and it was central to an emotive performance where collective nuance trumped individual virtuosity. This elegant, intuitive quartet gig rather whetted the appetite for the April release of Surrounded by Sea. With Rochford on the studio drum stool, and with its superior ECM production values, the CD will no doubt spring a few more delightful surprises.