Brian Pareschi: And the BP Express 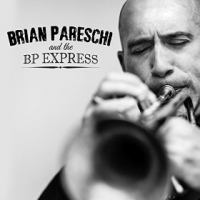 For his debut recording as leader, New York-based trumpeter / composer / arranger Brian Pareschi has assembled an octet, named it the BP Express and charged it with breathing life into seven of his original compositions and dazzling arrangements of Frank Loesser's "I Believe in You" and the Johnny Green standard "I Cover the Waterfront." The music is eloquent and engaging, and the octet carries out its assigned task with dexterity and assurance.

Besides playing tasteful trumpet, Pareschi writes well, whether riffing on bop-linked themes or summoning the image of a fast-moving train, as on "BP Express." The litmus tests are the better-known tunes; "I Believe in You" overflows with good-natured resilience, while "Waterfront" glides smoothly along with less of the heartache than is manifest in its lyric. They are sandwiched around Pareschi's percussion-centered "Congo Blue," written as an exploration of African rhythms and blues. Elsewhere, Pareschi approaches the bop idiom from several angles, beginning with "Angle of Repose," a fast-paced backdrop for soloists (in this case, Pareschi, tenor saxophonist Mark Hynes, alto Matt Hong and pianist Adam Birnbaum). The lyrical "Double Down" was inspired by the classic Miles Davis recording, Birth of the Cool, the gossamer "Farfalla" (on which Jim Hershman's mellow guitar makes it a nonet) by the Brazilian themes of Astrud Gilberto, Stan Getz, Antonio Carlos Jobim and others.

Pareschi wrote the lovely "Song for Pea" for his wife, Maureen, while the high-stepping finale, "No, You Do!" salutes another Miles Davis masterwork, "Sippin' at Bells." Soloists throughout are first-class, the unit as a whole snug and responsive. Be that as it may, what sets the BP Express apart from many other groups its size are Pareschi's splendid charts, every one of which exudes an irresistible charm and is well worth hearing and appreciating more than once. In its initial trip from the station, Pareschi's BP Express is definitely on the right track.

Angle of Repose; Double Down; Farfalla; BP Express; Song for a Pea; I Believe in You; Congo Blue; I Cover the Waterfront; No, You Do!