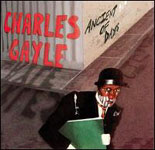 Charles Gayle is the ultimate power tenor man. Most of his recordings, notably Repent, Consecration, and More Live at the Knitting Factory are vats of molten lead, music to go through the wall headfirst. He's a master of the altissimo register of the tenor, and of the screams and cries that, he says, come straight out of the church, of the sanctified ecstasy of Pentecostalism.

Anyone who dismisses him as a mere screamer, however, dismisses the abundant evidence on his discs that, even at top speed, he is a saxophonist of the first rank. His FMP classic trio recording with William Parker and Rashied Ali, Touchin' on Trane, brings down the intensity a notch or two to reveal a tenor saxophonist with a huge tone and astonishing improvisational powers. And his 1997 album of more directly spiritual tunes, Delivered, brought a strong and grainy tone together with that improvisational ability to create a recording of astonishing and surprising beauty. And now, on Ancient of Days, he continues in the same vein.

A quartet recording with Hank Johnson (piano), the enormous Juini Booth (bass), and longtime partner Michael Wimberly (drums), Ancient of Days proves that Gayle belongs with the greatest of modern tenor saxophonists. He sticks to tenor throughout the recording (which means that for this one he left his bass clarinet, keyboard, soprano saxophone and viola at home), and his playing shows a full-bore melodic grandeur that approaches the heights of Touchin' on Trane. Anyone who wonders where that one came from, and if lightning can strike twice, shouldn't miss this one.

Gayle's tone on this recording is somewhere between Coltrane's and Ornette Coleman's on Ornette on Tenor. On "New Earth" he seems to be making use of material from the Duke Ellington piece "Take the Coltrane," which Duke brought to his 1961 meeting with Trane. On this and other pieces the gospel inflections are obvious - and profoundly moving.

Charles Gayle has never really been given his due. This recording is abundant evidence in itself that he deserves far wider recognition. Any jazz fan should not miss this one.