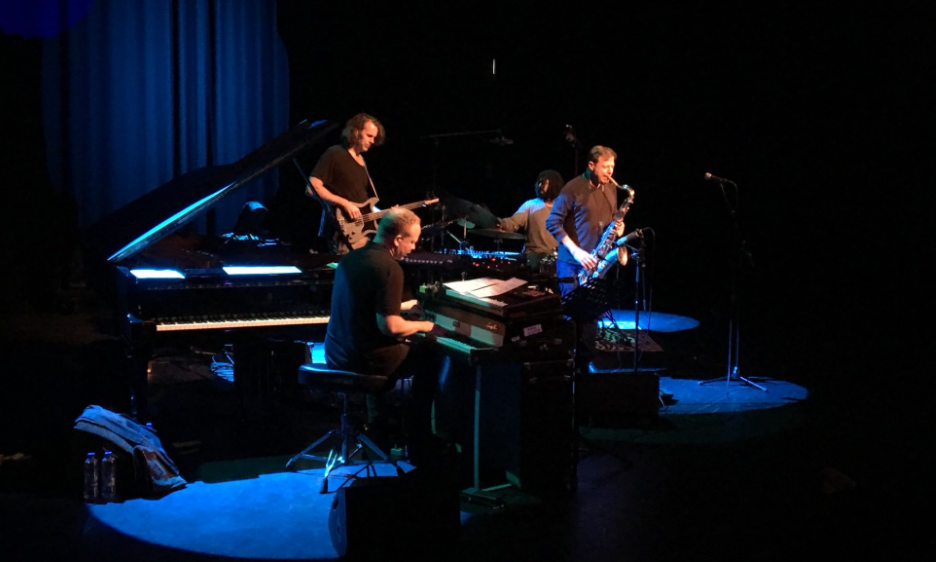 The flutes put on loop by Potter through the sampler tell more of the Sirens and the noisome oracles disquieting his current, yet they serve well his current end of repairing the electric complex of jazz congregating man, the social animal.

The record Circuits (Edition, 2019) makes use of production as a means to architecturally bring to bay today's average, one may say alienated jazz listener, the "grooveland" referenced by Potter merely an excuse and hardly the verdict in this trial. It is a covered walk 'round new-fashioned, urban currents—skintight, monasterial and modern. The quartet Circuits, on the other end, operates in a fully separate way. It does not negate the currents, even if fully bypassing the source design—that of the circuits working as vessels for currents, electric or urban. So transmuted a simulacrum renders all bay irrelevant, introducing in its place the labyrinth of the city— the unlimited urban space, which ensures the same smothering effect without risking a blunt discursion.

Played at the concert in Porto after the opener is the eponymous track. The live rendition takes significantly longer to uncoil. On the record, "the tune" is in motion within less than a minute. At Casa da Música, it takes the namesake quartet over two minutes to build it up, after which Potter's introduction takes a conclusively different turn, adding to the build-up as opposed to repel it. This is hardly due to them struggling. The quartet employs a varying proposition missing from the record, which is refreshingly gaping, naked and navigable. Craig Taborn, Justin Brown, and Tim Lefebvre; replacing respectively, James Francies, Eric Harland, and Linley Marthe, of the Editions album; on keyboards, drums; and electric bass, saunter at times indefinitely through settings vaster and wider in range compared to their album counterparts, all ferreted by Potter himself. Here Brown's addition on the drums plays a meaningful role, which in lieu of the erratic assertiveness of Harland, permits new latitudes, differentiating the quartet from the record in fairly evincive manner. What this means is Potter has to level the now-missing erraticism on his own. A very stimulating process which demands contingencies a traditionally capable player like Potter would usually not intercede with. Yet does any of this mean anything to the Norte audience?

Two days prior to the concert.

A local acquaintance is driving me back in the wake of a community music event. Noting my anticipation of Taborn's performance, I invite him to the upcoming concert. He is well aware of the event but does not recognize Taborn. He talks of Potter, who is to him one of today's greatest jazz musicians. Rosters of Norte's own Porta-Jazz and Lisboa's Clean Feed are equally foreign to him, as is Potter's discography. He is but informally interested in jazz and has seen Potter perform twice in the past. The venue, itself one of the most renowned in the region, publicizes Potter as one of "the most admired saxophonists of the last few decades."

The night of the event.

Attendance of a fairly large number. The demographic is indeed mostly informal, casual listeners. Noticeably absent from the rather large crowd are a number of my prior contacts made during the smaller Evan Parker event from six to eight weeks ago. Halfway through the set. Few leave. Lefebvre, along with Potter, are mirthful beyond all machineries. The set continues and the diverse audience stays content.

Potter's Quartet is not the only act playing the venue the night. Erik Friedlander's Throw a Glass goes in advance, followed by a break. The transition is, in terms of musical setting, one of country into town. Or of urban oases. Taborn is the first to enter the stage. Taborn, who will have a hard time convincing me after Uri Caine's exceptional performance from the Friedlander set. Anonymity can be a delight, too. "The Nerve," played as the opener, fractures even if leisurely the deliberate, subtle construction of Friedlander's Artemisia (Skipstone, 2018). The about-face is both dramatic and dialectically compelling. The rustic intricacies crayoned by Throw a Glass appear remote and fabled now. Circuits spread, in their place, cities of formidable candor.

I meet by chance one of the senior absentees at Serralves museum. He and his also senior friend explain to me the reason for their absence. Potter is to the freeform aficionados more of a has-been. They also reaffirm implicitly my previous study on Norte's own jazz scene, in that they remain dismissive of it by large, considering it self-contained in the first and crumbling in character. They will never know, like with pLoo before it, of the many irregularities between Circuits the quartet and Circuits the album. It may appear paradoxical that Potter, by virtue of the myth surrounding him, falls between the cracks of the average and the aficionado listener each in its own way, in the Norte, where the former remains fettered to the myth alone and the latter alienated by it. The quarrelsome yet constant latency of this reception is reminiscent of the way in which Kafka's unmusical "Mouse Folk" remain simultaneously captivated and antagonized by the passing presence of their fellow myth of a musician, Josephine. "Our singer is called Josephine. Anyone who has not heard her does not know the power of song." Potter's recent switch to Edition may falsely recur as the culprit here, perhaps accounting for some of the reasoning behind a dismissal. Commuting the dark, cinematic imprint of ECM into Edition's animated and perky sweep, both of which share the very same épistémè, indeed may not appear as irrelevant to most. The Sirens (ECM, 2013) differs, nevertheless, from Circuits, only in adjustment. It is not as though Potter's ethos were suddenly invaded by those of Tim Garland, Kamasi Washington, or whomever in vogue today. It is rather that Potter was never the "Bird" to begin with, despite the myth announcing him so, and his return to the "grooveland," veritably a return. Whether he is today's 'moldy fig,' as suggested by the freeform aficionado, who defines creativity under terms that contradict Taborn's raison d'être to play alongside Potter—terms unrelated to unconventionality and more concerned by a differing convention—is a moot reflection at best.

Wings in Lieu of the Bird

Heard and thus realized live, Circuits has wings; and it is up to Potter to take further steps to release it in such form— included at the end of the essay is a neatly done footage from Circuits' nearly identical performance at Festival À Vaulx Jazz, roughly seven days prior to the Porto appearance—and to freeform aficionados; to reconsider their departing with Potter. As it stands, the "error to take myths one at a time," (Techniques, Technology and Civilisation) is not, in the case of a contemporary, cultural myth, "severing them from what has preceded them," as Mauss once proposed. It is the essential condition according to which such myths are differentiated from classical mythology: transience, corporeality. The contemporary myth is a man. And same as Kafka's Josephine, the anthropomorphism true of him is one clear of allegories—In time he will disappear.

End of the set.

Some sixty percent of the audience has left. The quartet makes a surprise return for an encore. The flutes put on loop by Potter through the sampler tell more of the Sirens and the noisome oracles disquieting his current, yet they serve well his current end of repairing the electric complex of jazz congregating man, the social animal. The electric, urban currents of the myth endure. 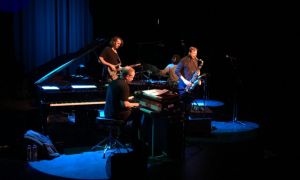 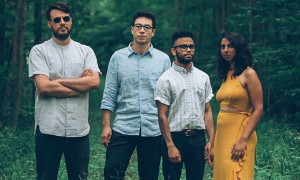 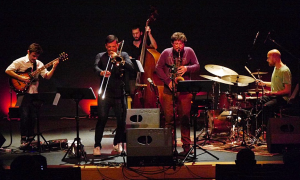 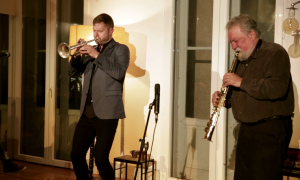 'Jazz... because Heraclitus, not Socrates.'