Steve Wilson at the Jazz Room 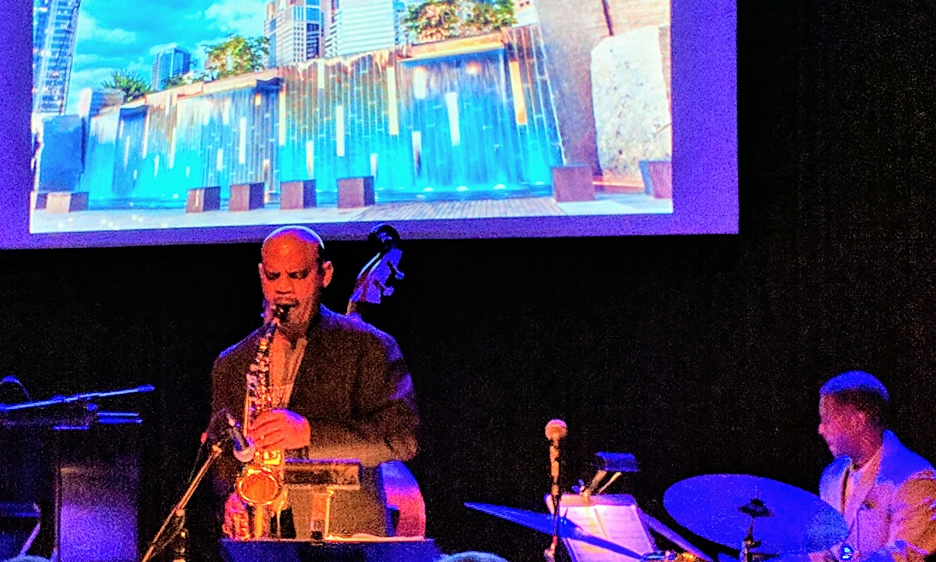 Saxophonist Steve Wilson has an extensive discography. In addition to his recordings as a leader, he has played with such jazz musicians as pianist Chick Corea, saxophonist Michael Brecker, bassist Dave Holland, big band arranger Gerald Wilson, and saxophonist Joe Henderson. He spent the week as guest clinician at JazzArts Camp, working with young area jazz players. For his shows at the Jazz Room he had an all-star local ensemble. Double bassist Neal Caine had previously appeared in the concert series helming a Charles Mingus tribute; pianist Ernest Turner led a tribute to Thelonious Monk; trumpeter Mondre Moffett was making his first appearance in the series; drummer Ocie Davis is Artistic Director and Co-founder of JazzArts Charlotte (the nonprofit organization behind the jazz camp and this concert series), and has performance experience with many New Orleans jazz players (he relocated to Charlotte after the devastation of Hurricane Katrina).

The quintet began their set with "Sisko," a Wilson original with a call out to the Star Trek character Benjamin Sisko from Star Trek: Deep Space Nine (in the introduction he asked if there were any Trekkers in the audience). It is a modal tune with a Herbie Hancock vibe, rhythmically reminiscent of "Maiden Voyage." After the head the leader took a long, adventurous alto saxophone solo (the only horn he played during the show, although he also plays soprano saxophone, flute and clarinet). Turner's piano solo tapered down to a lyrical ending, which Moffett's trumpet solo continued, before building to a frenetic climax. Caine took over for a remarkable unaccompanied double bass solo, full of chords and arpeggios. He is a very physical player, and it is easy to see why he would take on the music of legendary double bassist/composer Mingus.

Wilson said the next tune was an original in honor of Thelonious Sphere Monk, North Carolina's greatest contribution to music. Even his middle name was ahead of his time, so the tune is entitled "Spheresophically." The performance began with stunning unaccompanied stride piano from Turner (evoking both Monk and his influences), leading into a Monkish head. The solos broke down to an alto saxophone/piano duet, with Wilson incorporating several Monk melody fragments before leading the whole band into "Straight, No Chaser."

Wilson described pianist/organist Fats Waller's "The Jitterbug Waltz" as the first recognizable jazz waltz. The band took it at a rapid tempo, with his saxophone solo full of cascading lines, sometimes going more outside than previously—topped off with a quote from "Comedy Tonight" (from the Stephen Sondheim musical A Funny Thing Happened on the Way to the Forum). The ballad of the set turned out to be Duke Ellington's "Heaven," of which Wilson said "all you have to do is play the melody." He then enthused about the power of jazz to bring players together, describing this ensemble as an "instant band," having never played together before.

Trumpeter Dizzy Gillespie's "Con Alma" includes Latin rhythms, making it a perfect feature for drummer Davis. He made the most of his unaccompanied solo opening, stretching out in an uninhibited way before leading the band into the head. Wilson continued the feature by breaking down to saxophone and drums at the conclusion of his solo. Their exciting duet concluded with the two instruments trading fours in classic bebop jam session style. Called back for an encore, Wilson cited the James Brown saying "hit it and quit it:" it would have to be brief, but they would make every second count. They launched into the funky blues of "Jake's Place" from Wilson's recent vinyl-only album Sit Back Relax & Unwind (J.M.I. Recordings, 2017). Wilson coached the audience to clap the opening rhythm, and the spirited performance concluded with trumpet and saxophone soloing together, goaded on by the rhythm section.

A most enjoyable show, aided by the "jazz club" atmosphere of the Jazz Room (which is really a small theater, but is set up to feel like a club, including a bar at one side of the stage). Wilson's pickup band definitely earned the "instant band" moniker. It is common under such circumstances to keep things simple, leaning on the head-solos-head bebop convention. But this group tackled original material with aplomb, including unusual structures and Wilson's arrangements on the fly.