BY DAN MCCLENAGHAN
October 12, 2013
Sign in to view read count 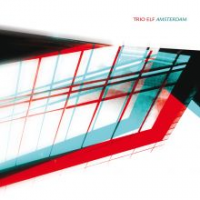 One aspect of German pianist Walter Lang's artistry involves his work in the traditional piano trio format, evinced on stellar recordings like Eurasia (M & I Records, 2009) and Softly As In A Morning Sunrise (Nagel Heyer, 2005). His approach here comes out of the Bill Evans school of the piano trio, with a light and subtle keyboard touch and vivacious interaction with the bass drums. Lang's own sweet and lovely way with a melody, inside the interaction of the trio, is top notch. But Lang has another side that surges to the forefront when he plays with Trio ELF.

In fact, Amsterdam—recorded live in that city's famous Bimhuis Club—opens with the delicate, acoustic "Casa Do Tom," a drifting-on-a-cloud tune that showcases the trio's gentler side. It's the second offering, "Arearea," that takes the sound out on the modern tangent. Tight and mechanistic, and aided by Mario Sutel's real time sonic manipulations, the tune could be a soundtrack for a automatic, android-manned factory stamping out complex computer parts. And the androids are dancing.

"Evet" hums into being on an eerie, reverberant bowed bass, before it shifts into a groove as tight as something Nik Bartsch's Ronin might conjure, with an electric warble backdrop. Lang's piano slipps into a fragile melody inside the powerhouse foundation of the bass and drums.

The majority of the songwriting credits are shared by Lang and Feller; Lang's "Hammer Baby Hammer" shifting out of a pounding rhythm into an almost pastoral reverie, leading back into the return of the rhythmic relentlessness, then back to Lang as his plucks out astringent notes in front of Eisenhauer's rat-ta-tat drumming, accompanied by an electric glow of manipulations. Faller's "Adria" features a softer sound. A hushed ballad, almost a whisper at first, that then explodes as the trio goes into a brief segment of the seismic permissiveness that wanes into, again, the gentle reverie of the opening.

Casa Do Tom; Arearea: Evet; Sounds in My Garden; Hammer Baby Hammer; Why? Because; 746; The Dark Sea; Down; Adria; The Man-Machine; No goodbye.