Kelley Suttenfield: Among The Stars

By Dan Bilawsky
September 14, 2014
Sign in to view read count 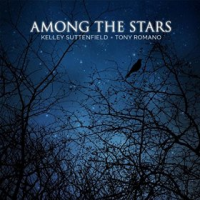 Voice and nylon-string guitar. That's it. Nothing else to hear on this one, but nothing else is really needed.

Vocalist Kelley Suttenfield's first album—Where Is Love (Rhombus Records, 2009)—was a well-crafted, full band affair that reimagined the works of everybody from Wes Montgomery ("West Coast Blues") to Caetano Veloso ("Coraçao Vagabundo") to The Platters ("Twilight Time"). On her sophomore date, she strips away the band, leaving only guitarist Tony Romano in the picture to help her explore music of the night and songs of love.

Among The Stars offers quiet and absorbing takes on jazz standards along with classics from singer-songwriters like Neil Young and Bob Dylan. In theory, pieces like "Fly Me To The Moon" and "Harvest Moon" may not seem like they belong back-to-back on the same program, but Suttenfield and Romano shape each and every number to fit their aesthetic. "Fly Me To The Moon," for example, has no Sinatra-esque swinging swagger to it, moving instead atop moody lines, and there's no steady strum to calmly propel "Harvest Moon." Actually, there's rarely any steady strum to speak of. Romano isn't a four-chords-to-a-bar accompanist. He's far more interactive with song and singer, dropping his own bass notes into place, connecting the harmonic dots with single note lines, and giving the occasional chordal punctuation or aside. When Romano does wear the rhythm guitarist hat, as on parts of the striking "Just Say I Love Him," he remains understated in his approach.

Suttenfield's voice has been rightly compared to that of Susannah McCorkle in the past, but that connection is really just a surface similarity. McCorkle had great highs and lows in her delivery; Suttenfield works in narrower confines, but she knows her working space extremely well. She doesn't usually look upward toward the heavens or explore the depths, preferring instead to get the most out of the middle ground.

These ten numbers come and go in less than forty minutes, but that's more than enough time for Suttenfield and Romano to make a lovely statement. Among The Stars is a real low-key charmer.

Fly Me To The Moon; Harvest Moon; Beautiful Love; Wash Me Clean; Just Say I Love Him; One Fine Day; Try Your Wings; People Will Say We're In Love; Until It's Time For You To Go; I'll Be Your Baby Tonight.

Title: Among The Stars | Year Released: 2014 | Record Label: Self Produced