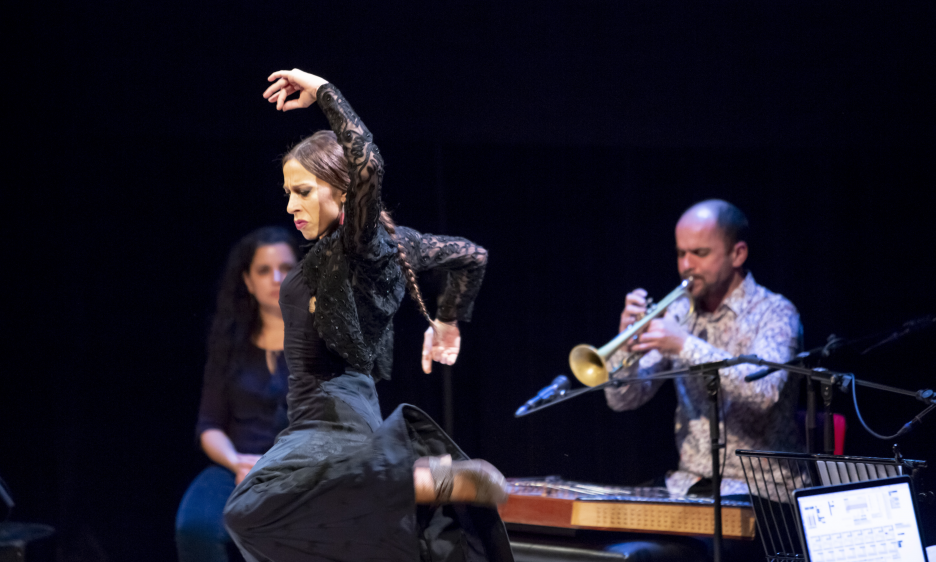 Luminescencia" is a new work by US-American composer-musician Amir ElSaffar, co-produced by Dutch Flamenco Biënnale and French Fondation Royaument. It had its world-première in Amsterdam at this year's Flamenco Biennale, a country-wide festival in The Netherlands founded by Ernestina van de Noort in 2006.

The line-up of the performing ensemble already indicated the extraordinary character of the work: led by Amir ElSaffar it had Spanish singer Gema Caballero and Spanish dancer Vanesa Aiba, US-American violinist Dena ElSaffar on the Middle Eastern bowed rebab or jawza and on Western violin, Pablo Martine Jones on percussion and Italian composer Lorenzo Bianchi, based at IRCAM in Paris, on electronics. Amir ElSaffar, widely known and acknowledged in the jazz field, played trumpet and santur, the Persian hammered dulcimer, and he was also singing.

The expectation aroused by the program brochure and the remarkable line-up was exceeded by an exceptionally captivating performance of subliminal radiation and rare touching beauty. "Luminescence" emerged from a darkened stage on an elongated surreal sound-beam from the trumpet. From where did it come and where did it go, what combined how and when ....

Flamenco is a result of long distance migration par excellence considering its bearer's origin in India. On its way from India to Spain it has been filtered through a series of regional musical cultures from the East to West. In the Middle Ages Arabian musicians brought instruments such as the santur and the lute to the Iberian peninsula (then named Al Andalus). Let's not forget that in the process of its crystallization, flamenco was played (mainly) on the oud—I had the luck to see one the last old flamenco oud-player a longer time ago performing. And as known Paco De Lucia was an accomplished oud-player too and by using the instrument in recordings and elsewhere he clearly related to the Moorish origins of flamenco.

ElSaffar 'fused' Eastern maqam modes of music, especially from the Iraqi tradition, and flamenco in "Luminescencia" in a particular way. The piece was designed as a journey through different (cultural) origins, traces, nerves, temperaments and moods of the music that is now called flamenco. Moreover, it was not realized simply as a pictorial broadsheet but rather as a thrilling radiant stream of its own unique dramaturgy, a stream full of transitions, slopes, lyrical lingering, accelerations and outbursts, or just a merry upswing dance part given shape by the interplay of five distinct voices. It became especially evident in the highly flexible modulations of singer Gema Caballero.

Singer Gema Caballero was indeed a miracle of modulation, switching with ease, suppleness and coequal passion between cante jondo and lighter modes, as well as adapting effectively to the maqam singing of Amir ElSaffar and entering wonderful interactions with the electronics of Lorenzo Bianchi. Dena ElSaffar, the leader's sister, fulfilled a crucial bridging role with her beautiful sensitive timbre on the ethereal jawza, providing an unusual embedding for what listeners of flamenco music are used to. She also carried and enriched Amir ElSaffar's santur playing and his singing, the core maqam parts. Consequently, a continuously moving recontextualization took shape. Percussionist Pablo Martin Jones played a special drum-set extended with cajon, which, particularly in the dance parts, fulfilled a bass function. He took a restrained role in the first half and took more space later, especially with very effective and beautiful cymbal work. Lorenzo Bianchi (Hoesch) is a composer and experienced live electronics musician especially active in dance, ballet and theater. In January 2019, for example, he contributed a composition for the Virtual Reality Project 100 Years of Bauhaus / Total Dance Theater in Berlin. Here he operated on the subtle side as well as on the more violent side, for example in the enlarging of a quivering outburst of Amir ElSaffar's trumpet in the second half of the performance. His electronic support and interventions, impeccably executed and finely attuned with the acoustic instruments, made a lot of sense musically and contributed greatly to the shaping and re-shaping of the musical journey.

There was the aforementioned overall dramaturgy of the piece providing an exciting arc of suspension, and there was the exciting syntax of Vanesa Aibar's highly dynamic, expressive dance movements projecting, punctuating and emphasizing the musical flow. Both came together compellingly. Airbar breathed through every moment of the performance. Dancer /choreographer Vanessa Aibar (1983) is a new and remarkably expressive force on the zenith of Spanish dance. It is a blessing to have such an amazing dancer, infusing sharp significance as an integral part of the performance of "Luminescencia." The edginess and explosive force of her abrupt about-turns and the extension of her body into the physical and narrative space—chiseled into the air—through her amazing arm work were just enthralling.

Accomplishing the delicate balance and the refinement of the performance was the result of a 10-day-residency of the five artists at the Royaumont Abbey, north of Paris. Bearing in mind the experience of under-rehearsed performances it shows the importance and merits of good preparation of musical undertakings such as this one.

The overall dramaturgy of the work not only provided an exciting arc of suspension. It offered a creative leeway between socio-cultural commitment, communal binding and individual freedom. The work designed as a journey could be experienced as a continuously moving re-contextualization of known elements by confronting and augmenting those with newly explored means of expression. As such, it was not only a successful example of redefining the identity of flamenco. It was a luminescent example for intercultural and trans-stylistic undertakings in general. Trumpeter/santurero/singer Amir ElSaffar was an obvious and felicitous choice here and a continuation of other 'foreign' improvisers' work in the field of flamenco such as that of pianist Sylvie Courvoisier with dancer Israel Galvan and the deep immersion of recently deceased Puerto Rican trumpeter/conguero Jerry Gonzalez.