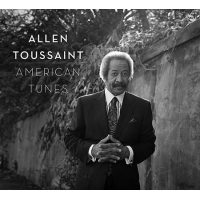 When it comes to the New Orleans sound and its purveyors, drummers may be the most integral, but the most celebrated are perhaps the pianists. Longhair, Booker, Rebbenack, Cleary, and even Fats Domino are all acknowledged to be in that pantheon. And certainly the name Toussaint has long been counted among them as well but, outside of New Orleans, more so by those in the know than the general public. This is partly because throughout his career, Toussaint's preferred role was more often as composer, producer, sideman or arranger rather than front man. His musical influence and playing, however were no less impactful on New Orleans' sonic legacy than any of the aforementioned piano icons. Which is part of what makes this piano-centric final recording so engaging -hearing the late Allen Toussaint's playing center stage with that immense behind-the-scenes legacy so eminently palpable in the music.

One of the most striking things on American Tunes is Toussaint's brilliant spare elegance on the piano. Though generally not an attribute associated with NOLA piano players, it is a Toussaint hallmark best exemplified on the four solo piano pieces included here: Toussaint's own "Delores' Boyfriend," "Hey Little Girl," "Big Chief" and "Mardi Gras in New Orleans." The last three tunes were popularized by Professor Longhair, whom Toussaint has cited as a huge influence. "Little Girl" is a straight-up hat tip but the versions presented here of the last two are staggering in contrast to their more familiar renditions. AT's "Mardi Gras" transforms the classic "call to party" into a tender, nostalgic slide show of his city, viewed through a post-Katrina lens. And while his "Big Chief" starts out like pure 'Fess, Toussaint morphs it so naturally into a quasi-classical extrapolation, it sets off no alarms. Had these things been done by anyone else with less grace or pedigree, the word audacity might have been included here.

It's this encompassing and incorporating of different styles that is another Toussaint hallmark. To this point, he has famously told of being raised in a home full of many disparate musical sounds (in addition to the ones heard on the streets of New Orleans). Thus it's not surprising that in an interview he once remarked:

"(When I was learning piano), I thought everyone played all styles. I was just trying to catch up."

This natural penchant for musical integration also speaks to his ability to stitch together the varied patchwork of material covered on American Tunes into a sturdy whole. Admittedly, it's a short trip from the 9th ward to Fats Wallers "Viper's Drag," then to a cover of hometown boy Louis Armstrong's 1930 hit "Confessin' That I Love You," but from there, he transitions to tunes like Strayhorn's "Lotus Blossom" and Bill Evan's "Waltz For Debby" before you even knew you left town.

In spite of the many fanciful excursions in song treatment, it's the balance of those treatments that holds the listener in a strong orbit. Toussaint may take NOLA classics far afield, but he also covers Ellington's "Rocks In My Bed" big and bawdy, like it came out of a Bourbon Street dive or, as in "Waltz For Debby," reveals a Guaraldi-like populism along with the song's distant Creole bloodlines. He at once readies you for surprise and steadies you with familiar smells of home....his home. Whether it's molding Earl Hines' rollicking "Rosetta'into an Evans-like delicacy with just a touch of cayenne or his Robeson-esque take on "Come Sunday," the surprises abound . Perhaps his boldest choice for inclusion is "Danza op 33" by New Orleans-born 19th century classical pianist Louis Moreau Gottschalk. One might think that a classical piece in this collection would protrude a bit but in Toussaint's hands, it feels a natural as a warm Gulf breeze filling a concert hall in the French Quarter.

For all the innovative mixing of flavors happening here, there is also some pure comfort food. "Southern Nights," one of Toussaint's self-admitted favorites from his own pen, lacks the lyrics of the original, but nonetheless wordlessly conveys it's wistful lyrical portrait of a South too little known by non-natives.

American Tunes does indeed draw from a wide variety of American-born sources that gives ample relevance to the title. And certainly Toussaint's culling of styles representative of this country makes it, in spirit, not unlike the Americana meditations of Bill Frisell. But on another level, it may be the musical link to New Orleans that makes the title even more apropos. America's celebrated identity as melting pot couldn't be better exemplified in microcosm than by New Orleans, which in turn is musically personified by no one better than Toussaint himself.

The final song, Paul Simon's American Tune," is at once the song most suggested by the album and its most bracing. The well-known rumination on the American condition, sung by Toussaint himself, rings true in it's proud, weary testimony. But, (in a way similar to the late Johnny Cash's final project with Rick Rubin), Toussaint's unadorned and vulnerable vocal resonates doubly in light of his passing shortly after the record's completion.

It's unclear whether Allen Toussaint knew that American Tunes would be his final album but it embodies his beloved city, his country and his life's work in so many important ways, it stands as a worthy finale.