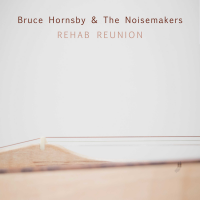 A Bruce Hornsby album with no piano seems sort of like a Chinese dinner without rice. Well, upon further consideration it may not be quite as crazy as it sounds. The man's career is defined by nothing if not restlessness, and he's managed to do something fresh and different almost every time out. The most surprising thing he could do would be to not surprise us somehow.

Rehab Reunion shows that that danger is as remote as ever. His longtime backing band The Noisemakers last appeared on record with the live Bride of the Noisemakers (429 Records, 2011), which was followed by a solo movie score, the bluegrass jaunt Cluck Ol' Hen with Ricky Skaggs (Skaggs Family Records, 2014), a joint tour alongside the Pat Metheny Unity Group, the demanding virtuosic performances of Solo Concerts (Vanguard, 2014) and 2015's Fare Thee Well stint with the Grateful Dead. Along the way the band changed two members to accommodate his gradual drift toward folk, trading steady saxophone for extra guitar, fiddle and mandolin.

Along with this shift came a habit of strumming a four-string dulcimer for the first couple numbers of each show, and the traditional Appalachian instrument only helps reinforce the essential streak of Americana that's always run underneath all the genre-hopping. Its simplicity made a striking break from his time at the piano developing two-hand independence skills and weird tonalities. Approaching something so differently patterned (the equivalent of having only white keys, as he puts it) also provided a great means to push himself in a sideways direction, paradoxically finding liberation in self-imposed limitations.

The upshot is a vibrant record that refreshingly gives the sometimes-overlooked facets of his music their place to shine. Even with spider-fingers virtuosity left out of the equation this time around, Hornsby carries the proceedings singing with rustic charm and spinning sweet homey melodies left and right. Meanwhile there's still a good dose of instrumental playfulness on the part of the band as they enjoy exploring their new dynamic. A couple tracks include solo shout-outs and faint whoops that suggest they were recorded live, which is always a benefit where this crew is concerned.

He may sometimes be a bit too willing to stretch a rhyme for a low-key chuckle, but at least the weaker lyrics (the tacked-on jokeyness of "Tipping" and "T.S.A. Man") are balanced out by the fun factor of Southern-style Noisemakers bounce and stomp. Those tracks make just a slight dip in quality amidst a colorful range of unassuming hooks and beautiful choruses. Sugary Jerry Garcia-like guitar nestles together with down-home fiddling and an always-lively sense of rhythm. The album finds room for a twangy title track most likely spurred by past sojourns with Skaggs, a smarter helping of silly wordplay with "Hey Kafka," and yet another reinvention of his perennial staple "The Valley Road"—now in its sixth different arrangement to date, this one a lighthearted Dixie waltz complete with washboard percussion.

Hornsby wisely bookends the disc with its strongest moments. Bon Iver's Justin Vernon adds subtle vocal shadings on the elegant "Over the Rise," suggesting something optimistic in that charming way he has. At the other end the finale "Celestial Railroad" is also not coincidentally elevated by a guest vocalist, this time letting Mavis Staples lead a bright gospel singalong to bring us on up to the big house. It's a fine celebration, warmly inviting and blissfully unself-conscious; a fun capper to a fun album and another happy indication that there are more good times waiting around the bend.