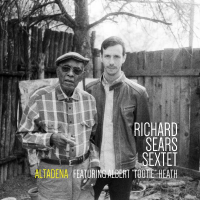 It is inspiration which fuels Brooklyn-based pianist Richard Sears's Altadena, a five part suite commissioned in 2013 by the Los Angeles Jazz Society featuring the legendary drummer Albert "Tootie" Heath. The professional linking between Heath, who first recorded with John Coltrane in 1957 and Sears, a rising young talent, began after the two met and exchanged ideas in 2012. Like many collaborations in jazz between younger and older artists, this connection is one of mutual respect and admiration.

The suite is vividly expressed through a top-flight sextet—Kirk Knuffke (cornet), Steven Lugerner and Patrick Wolff (reeds) and Garret Lang (bass)—in splendid performances that are clearly inspired by Heath's rich legacy but also Sears's dynamic vision. The melodic theme weaves itself through each section yet takes ingenious diversions along the way via affecting solos, intense and tender moments and eclectic progression which echoes the breadth and imagination of jazz pianist innovator Andrew Hill.

Heath's rhythmic verve is the driving force, offering effervescent swing in "Part One" as the instruments pirouette or unrelenting traps in "Part Two" with flavorful statements from Patrick Wolff's tenor and Sears's ethereal piano flight. This energy flows between the musicians in swelling harmonies in "Part Three" and distinct spots like Steven Lugerner's deep bass clarinet and Knuffke's flurried cornet in the gorgeous "Part Four."

Garret Lang's robust bass is the life pulse of "Part Five" bringing the suite to a satisfying conclusion. Bursting with Sears's fertile ideas, excellent playing from everyone and some inspiration from a jazz statesman, Altadena is one 2016's best releases.