BY MIKAYLA GILBREATH
October 1, 2008
Sign in to view read count

First you have to have a dream and then just follow it. Be assertive and never give up! Just be tenacious.

A fleeting glance at the cover of Alphonse Mouzon's CD Jazz in Bel-Air (Tenacious, 2008) gives one the impression that Mouzon was born into wealth, "with a silver spoon in his mouth." Listening to Mouzon's compositions and performance on the CD does nothing to dispel that impression. He delivers a live performance so polished and enjoyable that it would seem almost out-of-place in anything less than a top-notch venue. The use of earlier Mouzon compositions on television shows such as Lifestyles of the Rich and Famous and Runaway with the Rich and Famous also seems to support a perception of affluence. And the list of legendary musicians with whom Mouzon has played and recorded reads like a "Who's Who in Music."

But Alphonse Mouzon's rise to prominence within the jazz world did not originate from within the multi-storied grand mansions of Bel Air, California. Nothing could be further from the truth. Mouzon was born November 21, 1948, to a family living in one of the poorest neighborhoods of Charleston, South Carolina. "When I was younger, I used to tap dance at my little vaudeville show where I lived, a poor area, Charleston Heights, the ghetto I guess. I used to tap dance on the porch, and play my little drums that I made out of cans. People would throw nickels and dimes. I never got any quarters!"

His penchant for drums arose when he was little more than a toddler. "I first started playing when I was five, beating things. No one was musical in my family, so I don't know why. It just happened. God just zapped me and said 'Boom, you're going to be the one.' I just started beating and playing on natural impulse. And my brother was in the Army and he came back home and brought records. I heard these albums with Buddy Rich, and Max Roach. Wow, that's the first time I heard jazz. I owe it to my brother, Simon."

His first percussion instruments were the dishes and kitchen utensils he ate from. "I managed to break everything, so they gave me these metal plates to eat out of. My utensils, knives and forks, plates, and the cups were metal too, so I couldn't break em. It was like I was in prison or something." [laughing]

Mouzon's mother, who was very supportive of the young musician, bought his first set of drums when he was twelve. That was also his age when he played his first professional gig, with a traveling band that needed an emergency substitute drummer. "They were from Georgia. Their drummer was drunk or something, and I was the only drummer nearby. They woke me up, my sister took me to the club, and I got up on the stage and played. I was scared, but I did pretty well. After the first couple of notes, I was in." 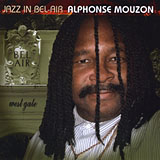 He received his first formal musical training while a student at Bonds-Wilson High School in North Charleston. And at fourteen he was already playing be-bop, calypso, and R&B on the club circuit in the Charleston area. "I was the only kid, and it was grown-ups that I played with. We were playing [various] clubs and Officers' clubs at the Naval base. So we had to play everything."

By age eighteen, he was playing with Chubby Checker at a hotel in Miami, Florida, a gig that nearly cost him his life. "I went out to the [hotel] pool and jumped in." Mouzon who readily admits his inability to swim, quickly found himself struggling to stay afloat. "The musicians were by the pool, [and] they thought I was kidding. But the receptionist jumped in and saved [me]."

In 1966, Mouzon moved to New York and within two weeks had landed a spot in the Ross Carnegie Orchestra. "I introduced myself, sat in, and got the job. I was from South Carolina and I didn't have any drums. I had sticks, but no drums. So I played on Frankie Dunlop's drums. Dunlop was the drummer with Thelonious Monk. He played with the Ross Carnegie orchestra too, when we wasn't working with Monk. So I was just lucky. Stuff like that doesn't just happen. I just walked right into it. I played with George Coleman, Stanley Turrentine. I met a lot of people."

In 1967, Mouzon had a memorable performance while sitting in with George Benson. "I was letting my hair grow at that time, so I would wear an Afro wig, because Afros were big back then. I was on the stage playing with George Benson, doing the drum solo, just playing, and the drumstick got caught up in my hair and pssssttt, ...I flung my hair into the audience! It was funny. I was so embarrassed."

Not long after arriving in New York, Mouzon took drum lessons from Billy Taylor's drummer, Bobby Thomas. "Bobby recommended me, when I was nineteen, for [the Broadway show] Promises, Promises. Bobby took me under his wing, and he was a good friend of Wayne [Shorter]. So when Wayne was doing his record The Odyssey of Iska (Blue Note, 1970), Bobby recommended me. So Promises, Promises led to Wayne Shorter, and Wayne Shorter led to Weather Report. But, before we got to Weather Report, I was at the Apollo Theater and Joe Zawinul was playing with Cannonball Adderley, whom I had met in 1966." Shortly after meeting one another, Zawinul and Mouzon made a recording with folk singer Tim Hardin called Bird On A Wire (Columbia, 1970). "And right after that we went to Columbia with Weather Report. I was twenty-one years old."

Mouzon spent much of the 1970s as a member of guitarist Larry Coryell's fusion band Eleventh House, with whom he recorded a number of exceptional albums. During this period, he also recorded several very successful R&B/dance albums, a genre which he would like to revisit with a future recording.

In 1992, Mouzon formed his own record company Tenacious Records, through which he has produced and marketed many of his subsequent recordings. Because he objects to the piecemeal method of selling music through downloads on the Internet, Mouzon prefers to maintain control over his projects. He views his albums as single integral units. "I look at my music as film, as a movie. You don't take little snippets out. You buy the whole movie. You don't download a scene. I don't like that." CDs purchased through Tenacious Records are each individually autographed by Mouzon before shipping, as a show of gratitude for purchasing the entire recording. Interestingly, in 2006 Mouzon also started his own film company, Tenacious Films, which produces documentaries and independent films.

The new millennium has seen no slowdown by this versatile and talented performer. After the success of Jazz in Bel-Air, a new recording is already in process. Mouzon's next album will be entitled Angel Face and will feature his twelve-year-old daughter Emma as vocalist. "I had her overdub four more harmonies, so she's singing a five part harmony. It sounds like a female version of Take 6." Mouzon has high expectations for the album. "That's going to be my Grammy. I have Kenny Baron on it, and Cedar Walton, great piano players. I have Arturo Sandoval, Wallace Roney, and Shunzo Ono playing trumpet, Ernie Watts, Antoine Roney, and Bob Mintzer [on sax], Christian McBride and Henry "The Skipper" Franklin on bass. I play drums and piano. And I play trumpet on one cut."

Mouzon continues to tour and play high profile live performances. "August the 4th [2008], was a historical moment. We played before 15,000 people when we did a double bill as the Eleventh House. We got Wallace Roney replacing Randy Brecker, and we brought in Julian Coryell, Larry's son, playing guitar. Excellent guitarist. And we had Victor Bailey from Weather Report, on bass. We opened for Return to Forever. So Stanley [Clarke], Chick Corea, and Al Di Meola. It was good to see Al again, and Lenny of course, Lenny White. We got the band together and did a double bill. It was awesome."

Not content to be merely a composer, multi-instrumentalist, film maker, and producer, Alphonse Mouzon has long been interested in acting as well. In 1975, Mouzon began studying acting at The Lee Strasberg Institute for Actors in Hollywood, California, the same school which produced such acting greats as Marlon Brando and Robert DeNiro. Mouzon appeared in the 1996 motion picture That Thing You Do, starring Tom Hanks, and he also composed a portion of the music for the film. In 2004, he appeared in the movie First Daughter, starring Michael Keaton and Katie Holmes. His latest acting endeavor is The Dukes, scheduled for release in October, 2008 and starring Robert Davi, Chazz Palminteri, Peter Bogdanovich, and Elya Baskin. The film also features two songs composed by Mouzon. "It's a comedy/drama. We [portray] do-wop singers [who] were good when we were young. We get older and we're trying to come back. Then there's a couple of setbacks. It's funny stuff."

When asked for his advice to young musicians or actors seeking to succeed in the entertainment industry, Mouzon may have partially revealed his own secret to success. "First you have to have a dream and then just follow it. Be assertive and never give up! Just be tenacious." Alphonse Mouzon's own dreams, tenacity, and assertiveness have undoubtedly helped him transcend the poverty and adversity of his earliest years. And those attributes, supplemented by his conspicuous talent, have also earned him a place in the rich and ever-broadening history of jazz.

Alphonse Mouzon, On Top of the World (Tenacious, 1994)

Mikayla Gilbreath (18) is a jazz saxophonist and student journalist who has had the good fortune to meet, and be inspired by, a considerable number of well-known jazz artists.