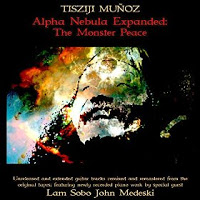 The visionary guitarist Tisziji Munoz was introduced to the listening public in the late 1970s as a sideman on a now impossibly rare Pharoah Sanders album (Pharoah, India Navigation, 1977). This was followed by his debut as a leader, Rendezvous With Now (India Navigation, 1978). After a decade-long gap in recording activity, Munoz began releasing albums on his own Anami Music label at a furious pace in the early 1990s. Since then, he's collaborated with a mind-boggling array of musical luminaries including Sanders, McCoy Tyner, Marilyn Crispell, Rakalam Bob Moses, Paul Shaffer, Rashied Ali, Ravi Coltrane, and John Medeski. Yet, somehow, Munoz remains a somewhat mysterious figure and one who seems almost criminally underappreciated in the jazz world-as-we-know-it. Part of this may be due to the fact that his primary gig is as a writer, philosopher and spiritual teacher. Unquestionably a virtuoso instrumentalist, Munoz has characterized his musical exploits as just one aspect of his true focus: "the way of spirituality, yogic development, karma- transformation, and self-transcending purificational spiritual practice." Because his guitar playing is a manifestation of his spiritual practice, Munoz' music literally speaks to its audience. Its impact is visceral and very real.

Summing up the music Munoz presents on Alpha Nebula Expanded: The Monster Peace in writing is not really possible. One can only provide a few reference points. Munoz' guitar sound is thick, sweet and heavy, recalling the glory days of early 70s ecstatic jazz-rock; the world of Jimi Hendrix, John McLaughlin, Carlos Santana, Bill Connors, and Allan Holdsworth at their most unhinged. However, Munoz isn't a guitar nerd and he sounds like no one else. Rather, the primary motivational force behind his playing is the spirit of John Coltrane. This is readily palpable throughout Alpha Nebula Expanded: The Monster Peace, especially in his "sheets of sound" approach to improvising and in the melodic content of tracks such as "Aspiration," "Goodbye Dear Sweet Mother," "Forgiveness as Joyous Peace," and "Mastering the Seed of Creation." His backing band is jazz-oriented and totally acoustic, consisting of two bassists, two drummers and a pianist, all playing and listening at the top of their respective games. But that is only a tiny little piece of the story. There's a truly spiritual dimension to Munoz' playing—and his band's—that takes their music well beyond the realm of simple techno-showmanship.

Originally recorded late in 1997 as a quintet with Don Pate, John Lockwood, Ra Kalam, and Franklin Kiermyer, John Medeski's piano was overdubbed in 2015. The result is a strong testament to Medeski's highly-developed musicality and ability to immerse himself in an archival recording. A frequent collaborator, Medeski obviously has a deep understanding of Munoz' musical concepts and is able to flesh them out in a very rich and deeply-felt fashion. He gets ample solo space here, as well, mostly in the form of lengthy piano intros and upward- spiraling duets with Munoz. Medeski's a little more prominent on the second CD, which contains somewhat more structured material, such as "Mastering the Seed of Creation" (a Coltrane-inspired waltz) and "Blues for the End of The World." Yes, they do a blues tune and it is very, very good.

Relative to the rest of his recorded oeuvre, Alpha Nebula Expanded: The Monster Peace is one of Tisziji Munoz' more ecstatic and "out" recordings. The guitarist gets into some utterly over-the-top Sonny Sharrock-like smears and abstractions on "Slipping Into Outer Space," "Mastering The Seed of Creation," "Divine Madness," and "Angelic Origination." Yet, to describe this music as "free jazz" would be missing the point. Harmonically adventurous and unpredictable, with melodies that appear and disappear almost randomly, there's a bobbing, flexible rhythmic backbone to the ensemble's playing throughout this 2-CD set that imparts a sense of joyous abandon while maintaining a sort of narrative thread that galvanizes one's interest. In other words, it's both "free" and "not free." It's also one of the year's most rewarding listening experiences.

Burnsign of the Arisen; Aspiration; Goodbye Dear Sweet Mother; Creating Gentle Fierceness; If It Is Precious; Stillness Before Ascent; Angelic Origination; Slipping into Other Space; Glimpses of Light; Fearlessness; Ephemeral; Mastering the Seed of Creation; Keeping It Secret; Divine Madness; Forgiveness as Joyous Peace; Blues for the End of the World.