Sam Taylor: Along The Way

By Jack Bowers
December 5, 2017
Sign in to view read count 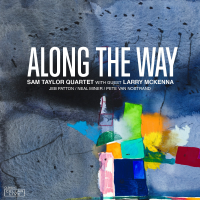 On almost half of the nine tracks on Along the Way, tenor saxophonist Sam Taylor's close-knit quartet is actually a quintet thanks to the emphatic presence of the renowned Philadelphia-based tenor, Larry McKenna. Taylor's impressive visitor, two months shy of his eightieth birthday when the album was recorded in May 2017, keeps on playing with the sort of enthusiasm and awareness usually ascribed to musicians many years his junior—as, for example, Taylor, for whom McKenna has been an exemplar and inspiration.

While Taylor is admirable on his own, listening to him trade assertive volleys with McKenna is even more awesome and pleasurable. Tonally and conceptually, the duo is a touch closer to Al Cohn and Zoot Sims than, say, Gene Ammons and Sonny Stitt or Dexter Gordon and Wardell Gray, even though the debt to those legendary duos and their singular era is discernible from time to time (and the album closes with Gordon's high-stepping composition, "I Want More"). As the solo order isn't given, it should be noted that Taylor has a heavier and darker tone, but not by much, while McKenna is more lambent and burnished, but not by much. Listeners may have to sort those things out for themselves.

For the record, Taylor and McKenna blow as a tandem on Betty Comden / Adolph Green's oft-heard "Make Someone Happy," Fats Navarro's impetuous "Fats Flats," the standard "There's No You" and "I Want More." McKenna is showcased on his even-tempered original, "The Close Things," while Taylor has center stage to himself on Ferde Grofe's loping "On the Trail" (from the Grand Canyon Suite), an exuberant reading of Rodgers and Hammerstein's "People Will Say We're in Love," the melodic "Wild Is Love" and Jimmy McHugh / Harold Adamson's paean to yearning, "Where Are You."

Taylor and McKenna are so engaging, individually and collectively, that it's easy to overlook the sizable contributions made by their talented teammates, pianist Jeb Patton (a persuasive soloist in his own right), bassist Neal Miner and drummer Pete Van Nostrand. Along the Way would be far less enticing without them, as it no doubt would be without McKenna, a generous guest who repays Taylor many times over for the invitation.

Make Someone Happy; Fats Flats; On the Trail; Where Are You; People Will Say We're in Love; The Close Things; There's No You; Wild Is Love; I Want More;