By Troy Dostert
December 5, 2017
Sign in to view read count 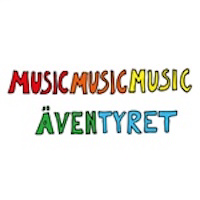 Although they haven't received much attention stateside, the three musicians in MusicMusicMusic have been fixtures in the Swedish jazz scene for years. They've released eight records of their own (all on their Hoob Records label), but they've also made plenty of appearances on others' releases. Pianist Fabian Kallerdahl recently made some fine contributions to vocalist Lisa Björänge's 2017 release Resting Spirit (also on Hoob); and his brother, Josef Kallerdahl, has been a regular member of vocalist Lina Nyberg's band. The six engaging cuts on Äventyret represent the group's distinctive take on modern jazz, providing ample evidence of the band's ongoing relevance in the global jazz scene.

MusicMusicMusic's sound relies on deceptively simple melodies that evolve in creative ways, helped significantly by the kinetic drumming of Michael Edlund, who brings the crucial energy needed to give the songs their sparkle, especially on the up-tempo tracks. The opener, "Basenji," for example, while at first staying within a relatively staid register undergirded by Fabian Kallerdahl's ostinato figures, is immediately transformed once Edlund kicks the track into overdrive with a funky, off- kilter beat. The resultant energy gives the music its dynamism and spirit of surprise, with a sense of expectation accompanying the twists and turns of the track. The same rhythmic intensity characterizes "Prisoner," where a more complex tune and time signature succeed wonderfully due to the group's ability to stay locked on to Edlund's infectious pulse.

The more subdued pieces don't generate quite the same level of interest, as "SWAT" and "Made in China," the latter employing Nils Berg on alto flute, suffer a bit from the stasis that results once the main musical ideas have run their course. Some listeners may find the ample use of synth parts on these tracks to be somewhat wearying as well. Even so, when the group offers its heartfelt version of Bob Dylan's "You're a Big Girl Now," the trio's ability to find the enduring beauty in the piece is undeniable. It's a terrific finish to a worthwhile and enjoyable release.