Allan Holdsworth/Alan Pasqua: Tribute to the Music of Tony Williams

The swing time broke apart with Holdsworth tearing at the upper registers on the neck of his guitar, and Pasqua took a hard, distorted organ solo, taking the time further outside.

Allan Holdsworth/Alan Pasqua
The Triple Door
Seattle, Washington
September 26, 2006
The music started with an easy, laid back swing, with guitarist Allan Holdsworth and organist/electric pianist Alan Pasqua providing texture. Drummer Chad Wackerman accented the upbeats as the groove intensified, then the group brought the music down into a bass solo by Jimmy Haslip. The groove continued and Holdsworth led into a solo that increased in complexity while Wackerman played off of him, accenting and breaking the time up. As Holdsworth's chord progressions were pulled back into solid time, the groove laid out a bit with less intensity and Pasqua soloed, finally bringing the piece to a calm ending. 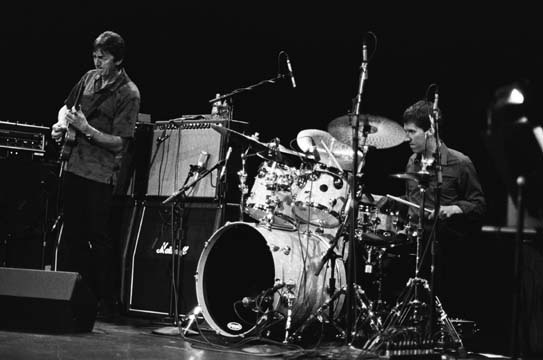 The second piece had a mid-tempo groove with Wackerman laying in on the drums, his hi hat on all fours in straight time with the two and four on the snare. Holdsworth immediately let loose with a blazing solo, his fingers flying progressively up and down the neck of his guitar, taking the rhythm out and finally back inside to lay the beat back down with sustained notes. Wackerman soloed against Haslip's bass while keeping time on the hi hat. Executing classic improvised patterns across the toms in matched stick position, Wackerman brought his solo to a climax and dropped back into the beat so that Pasqua could take a solo on organ, breaking up the music, then ending the tune abruptly.

Complexity characterized the third tune as it opened with breaks and a fast paced swing powered by Wackerman laying triplets down on the hi hats. Pasqua soloed on electric piano as Wackerman broke up the time while keeping with the natural progression of the tune. Pasqua dropped out of his solo to bring the intensity of the groove down and Holdsworth matched the tempo with a solo, climaxing with repeated phrasing on the upper registers of the neck of his guitar. As Wackerman's intensity picked up with powerful rolls and accents on the down beat, he frequently stepped out to break up the time, working off of Holdsworth to bring the time back to its up-tempo swing, and the piece ended with a blazing drum solo.

The next tune was a medium tempo shuffle with Haslip soloing fiercely on the bass against Wackerman. Electric piano and guitar pushed hard, distorted notes, Pasqua's tone bolstered by distorted wah, and Holdsworth cut loose with speed and fluidity. Wackerman now swinging hard on his ride cymbal, the swing time broke apart with Holdsworth tearing at the upper registers on the neck of his guitar, and Pasqua took a hard, distorted organ solo, taking the time further outside, finally bringing Wackerman back to a shuffle. The group was swinging hard, Wackerman laying in patterns on the toms to take the music down to complete timelessness. Wackerman and Haslip provided texture with Pasqua that progressed into a broken groove in slow time as Holdsworth soloed with blazing speed, his tone adding to the texture created by the rhythm section. The piece gradually slowed further, and Pasqua brought it to completion.

After a powerful 90 minute set, the band came out for an encore, a volatile piece in rock time.