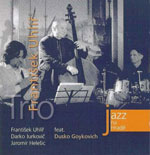 Jazz at Prague Castle is a series of concerts launched in February 2004 by the President of the Czech Republic, Václav Klaus. The series has presented several bassists, including Avishai Cohen, and Miroslav Vitous is slated to perform as well. Frantisek Uhlir was among those who were at the venue. If he does not have wide recognition now, this recording should change that situation.

This trio is a class act. Uhlir has impeccable technique and a deep sense of creativity. His approach draws the listener into an inner sanctum where he essays a well of moods and establishes an admirable rhythmic domain. He has a soulmate in Darko Jurkovic, who shares the glory with his lyrical guitar work and his two-handed tapping. The draw is completed by drummer Jaromir HeleÅ¡ic, who keeps the pulse constantly ticking with a delightful cadence.

The program is downright mainstream. Uhlir and Jurkovik each contributed two tunes, while the rest were drawn from the American Songbook. One of the most delicious pieces is "Banana Split. Jurkovic takes the blues tune into an instantly catchy swinging realm before he extends the skein of the melody, without digressing from the core. Then comes the bite, a stream of notes cascading from his fingers as his hands come into play and daub a wide, radiant canvas. HeleÅ¡ic revels with spacey accents and then Uhlir gives it a twist on the bass, shifting the texture in a flurry of notes or in bending them while continuing to acknowledge the melodic line.

Ballad time comes in on "From Heart to Hearts, where Uhlic bows in the sentiment. Jurkovic picks up his warmth. Together they form a cohesive, potent force, speaking in articulate tongues, the picture made complete by the subtle presence of HeleÅ¡ic.

Guitarist Dusko Goykovich joins the trio for the last four tunes. He fits in perfectly, complementing the trio and bringing in a well-rounded tone that reverberates with emotion. He comes out with a lithe swing on "Secret Love, shaping the tune with delectable turns of phrase. The rest of the band champions the cause and, as always, it is joyous to hear Jurkovic enriching the atmosphere with a roiling bed of rhythm, bringing in the final irresistible measure. A thing of beauty is a joy forever, and so is the quartet's take on "How Insensitive. Sensitivity and imagination carve a deep harmonic landscape, making this a magical ride.

By any standards, this is an excellent album.