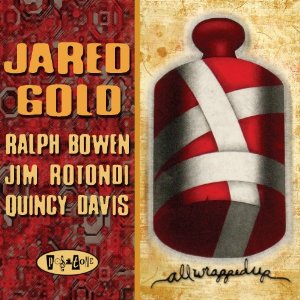 There's a noticeable change in organist Jared Gold's sonic template of choice, before All Wrapped Up even begins. While two out of Gold's three prior releases were quartet outings that used saxophone as the lone horn voice, all three releases were rooted in the traditional organ trio instrumental format. A different guitarist graced each one of those records, with Randy Napoleon, Ed Cherry and Dave Stryker each putting their own unique stamp on Gold's music, but the organist clearly felt it was time to move on, with guitar nowhere to be found on this album. Instead, Gold turns to two stellar horn players (and label mates) to help flesh out his new sound. Saxophonist Ralph Bowen and trumpeter Jim Rotondi add their own singular voices to Gold's music as the organist creates the next chapter in his career as a leader.

Five of the eight compositions on the album come from Gold, and the funkiest fare stands out above the rest. "Mama Said" starts off with both horns working through the hip head, as drummer Quincy Davis lays down an easy funk beat and things get even more soulful as solos are passed around. The album-closing "Just A Suggestion" has a few more rhythmic turns in the mix, but moves in a similar direction. Bowen's solo is the clear highlight on this one and his passion for the music is palpable.

While more than half of the material comes from Gold, each member of the band contributes one piece. Davis delivers a relaxed swinger ("Piece Of Mine"), but Bowen's "Midnight Snack"is a rhythmic rollercoaster ride, where the groove terrain is in a constant state of flux—though everyone knows exactly what they're doing—as the rhythmic underpinnings continually shift. Rotondi's "Dark Blue" follows, a mellow swinger that's the calm after the storm.

When All Wrapped Up reaches its conclusion, two things are abundantly clear: this newfound quartet format hasn't dampened or diminished the creative enthusiasm shown on Gold's earlier releases; and the album continues the steady evolution of one of jazz's most prominent rising star organists.