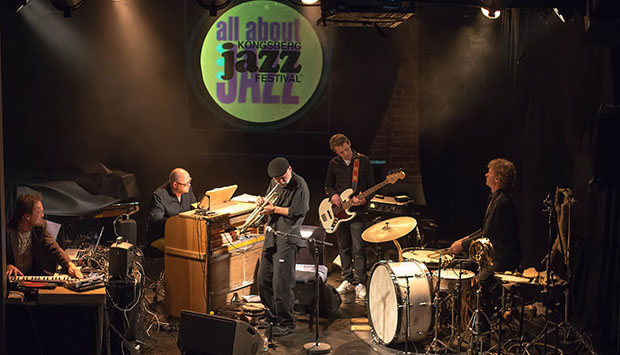 Kongsberg is a small town in Buskerud with about 24,000 inhabitant, situated s 55 miles west of Oslo, the nation's capital. Founded in 1624, after silver was discovered in the hills, the Danish-Norwegian king recruited German miners from the Harz Mountains (migration was common in those times). At that time, Kongsberg was the second largest town in Norway, rivaled only by Bergen. Also hosting the Norwegian Mint since 1686, mining ceasing in 1957, leaving modern-day Kongsberg a high technology center involved in the production of security systems that include armaments.

The Kongsberg Jazz Festival was founded in 1964; nearly forty years later, the 2012 edition presented nearly sixty bands in four days, among them eight bands from Kongsberg region—a lot, considering the town's size—and eighteen non- Norwegian bands. The festival has always sported a strong Norwegian presence, and in recent years has collaborated with Music Export Norway for the Silver City Sounds meeting that brings festival presenters, writers, photographers and other industry people from around the world to network and experience Norwegian culture during the festival's run. With a programming committee directed by Tor Dalaker Lund, the Kongsberg Jazz Festival is a community driven event, with citizens from the town heavily involved as volunteers.

All About Jazz Presents: Doing It Norway in Kongsberg

Regional music scenes get attention from abroad and exchange can take place, depending on what they have to offer—how open-minded, self-conscious and active the people participating are. Norwegian music has experienced remarkable development during the past decade, gaining a leading position across many genres with a considerable number of well-known— or even world famous—musicians. In the jazz sphere, Norway has brought forth concepts and figures that continue to have a considerable impact on the entire genre across the globe. Culture-driven, the scene has arisen out of the specificities of the culture and strong supportive constellations. Given that, it also has to be organized, maintained and developed.

The Kongsberg Jazz Festival, with its strong contingent of Norwegian musicians, the Norwegian scene it supports and the annual Silver City Sounds meeting, has a long history in the field of exchange. Here the idea was born to make a new move and switch roles; the idea was to not only expose Norwegian music to experts of all kinds from outside, but to let an expert from outside present his/her view on Norwegian music. All About Jazz Managing Editor John Kelman—who has been exploring Norwegian jazz with extraordinary engagement, the result of numerous trips to destinations around the country during the last few years—was an obvious choice to execute this task in a reliable, authoritative way.

This also entailed a desired cooperation, by the festival, with All About Jazz's worldwide internet platform. This is how All About Jazz Presents: Doing It Norway came into being; a newly organized element of the festival. The festival commissioned Kelman to program a festival-within-a-festival, selecting a variety of Norwegian groups and providing them the AAJ signature. This is not only a switch in perspectives, but is also an important recognition of the value of contributions from critics and music journalists alike.

The AAJ series started with Eple Trio, featuring saxophonist Karl Seglem. The trio consisted of pianist Andreas Ulvo, double bassist Sigurd Hole, and drummer Jonas Howden Sjøvag. It was a well-developed configuration that operated at the intersection of jazz, folk music and classical chamber music inspired by the approach pioneered by Swedish pianist Jan Johansson, adopted in the 1960s. The group has released three albums, Made This (2007), The Widening Sphere of Influence (2008) and In The Clearing/In The Cavern (2011), all on the Norwegian NORCD-label. The Eple musicians are all involved in various other bands: Ulvo in bands of trumpeter Mathias Eick, saxophonist Froy Aagre and singer Solveig Slettahjell; Hole, together with Hilde Marie Kjersem, in guitarist Jon Eberson's new band (one of the most successful Norwegian musicians); and Sjøvag in his own group, Navyelectre; and all of three participating in Karl Seglem's Quartet.

Eple, playing with whispering drums and a bass often sounding more like a human voice, created a rare and concentrated tranquility. Minimal movement went with a maximum of tension, which transmuted tones into shimmering pearls. These musicians were masters in circumvention and suspense, having deeply absorbed musical influences of various kinds, from the tonal richness of folk to modern minimalism. Seglem, who joined the group in the second half, fit in naturally, deepening the performance's singing quality. It was a testimony to the enduring power of carving sound like a river, soil and solid rock. The group went on passionately, almost over-stimulating the audience with the wonderful flow of its music. The trio's performance undoubtedly and strongly manifested Norwegian traits and clearly set the tone for more sounds to come.

Next was a contrasting double duo appearance, both with electric guitar: one a new match; the other an existing one. The first one brought together two different temperaments: Eivind Aarset, the guitar noir inventor—a climax-player who creates long, panoramic arcs; and Thomas Strønen, the Humcrush percussionist who emulates the regular irregularity of surrounding sounds, letting it sing and unite with old grooves and new music structures. Strikingly, the eight configurations chosen for All About Jazz Presents showcased six top-notch Norwegian drummers, some performing more than once in the series: Terje Isungset (with trumpeters Per Jørgensen and Arve Henriksen); Audun Kleive;, Torstein Lofthus; Helge Norbakken (with Henriksen and pianist Jon Balke); Jonas Howden Sjøvag; and Strønen.

Aarset and Strønen started this first meeting groping and sensing ...but they had to. For awhile, it was treading water in a sonic landscape of desolate plains struck by meteorites (Strønen's heavily amplified bass drums). It took time for both players to connected, but batting impulses back and forth, they ultimately built a platform on which to launch a rocket. It was a long wait, but finally they took a different stance from which a burning prairie song emerged. After this breakthrough, the rhythmical and percussive intensity of Aarset's playing increased considerably and the players broke new ground for awhile, balancing their modes of repetition, shifting, changing and dissolving. It was a set that opened up a wonderful insight into this kitchen of elements, colors and modes, where electronics have become second nature.

Vocalist Sidsel Endresen and guitarist Stian Westerhus have just released their first album together, Didymoi Dreams (Rune Grammofon, 2012), a live recording from last year's performance at Bergen's Nattjazz Festival of Bergen, and Westerhus has a new album to come soon, also on Rune Grammofon label, The Matriarch And The Wrong Kind Of Flowers (2012). The label, led by Fra Lippo Lippi guitarist Rune Kristoffersen, is now fifteen years old, with a flourishing existence that has presented a range of some of Norway's most creative musicians and their adventurous outings.

The Endresen/Westerhus duo, while still relatively new, has gone through an amazing artistic evolution and growth in the past two years—one which is hard to keep up with. Its creative soul, with rich capabilities and possibilities, continues to unfold uniquely every time Westerhus and Endresen play together. Didymoi Dreams was an extraordinary experience live in Bergen, and listening to this great recording does, indeed, bring things together as if in a dream. In Kongsberg, the audience leaned forward assuredly and, right from the beginning, was thrown in and immediately blown away when both musicians entered the stage and approached the music vigorously, completely surrendering both spiritually and physically—but especially Endresen, who entered on high level with her vocals. Endresen and Westerhus captured the audience from the first moment—intense, captivating, and inescapable. Acting totally in the spur of the moment, things fell in place, were sensed fully and made sense immediately. This was no miracle, but a real dream; one of those rare occasions when a completely improvised piece of music cut deeply...very deeply, in this case; something that could be both sensed and seen all around the venue.

Westerhus demonstrated exceptional surrender to the music, as well as intensity, musical sensitivity and deeply internalized technical mastery. It was this, combined with his mental sturdiness, that has made him such an outstanding artist. It was fully intended, it's what he does, as was the case with Endresen. There was an amazing chemistry between both musicians, one that that triggered and disclosed deep layers of their collective musicianship. It was absolutely unforgettable when a truly celestial song arose during the performance; equally unforgettable when Westerhus screamed into his guitar. This was the highest art of improvisation, the highest art of direct and deeply vibrating creation.

Kongsberg Kino hosted the DnB NOR Award-winner's concert, featuring the recipient from the previous year. Trumpeter Arve Henrikse won the 2011 award, which also included a prize of 300,000 NOK. The most important annual jazz award in Norway, violinist Ola Kvernberg was the recipient of the 2012 prize. DnB NOR is the main sponsor of the Kongsberg Jazz Festival, and the country's largest financial services group, owned by the state and the Sparebank foundation Sparebank was created as a foundation with the sole purpose of owning part of DnB NOR, and also donates up to 25% of its received dividends to numerous charities. 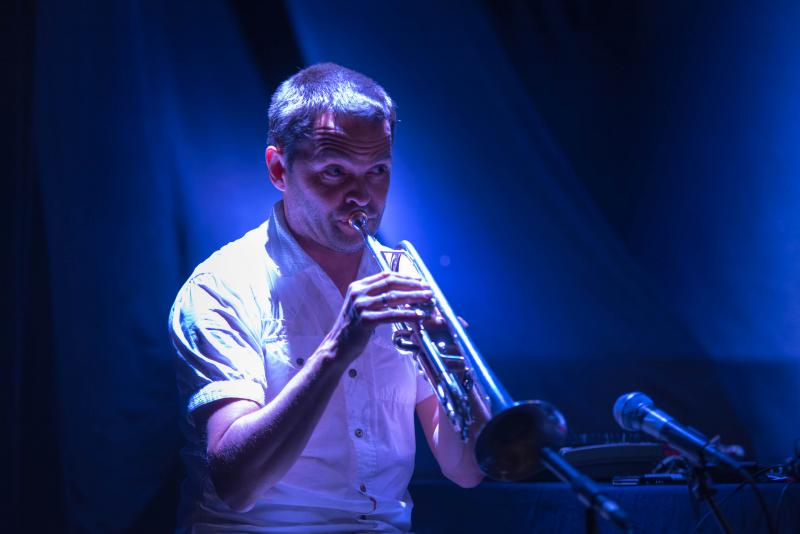 Henriksen performed at the Kongsberg Kino (Cinema) with a special lineup: guitarist and electronic soundscapist Helge Sten, percussionists Terje Isungset and Ingar Zach, dancer Theresa Skauge and video artist Anastasi Isachsen. It was a theatrical show with constructed light design, excellent dance and wonderful playing and singing from Henriksen. It was a new multidisciplinary group that deserves to continue, develop and deepen; no doubt, it will create more appeal to this kind of music and hopefully draw a new audience.

Catching Henriksen's show meant catching but a glimpse of the last All About Jazz Presents performance of the day, back at the old Energimølla (energy mill). A small venue, situated near the swirling Numedalslågen River, it was packed for this performance, in which the well-known power trio Elephant9—comprised of the great keyboardist Ståle Storløkken (a member of Supersilent and Humcrush, and the musical brain behind Motorpsycho's latest opus, The Death-Defying Unicorn (Rune Grammofon, 2012)); electric bassist Nikolai Hængsle Eilertsen (who also brought along an electric eight-string bass) and drummer Torstein Lofthus—was joined by Swedish guitar crack Reine Fiske, member of Swedish progressive rock group Dungen. 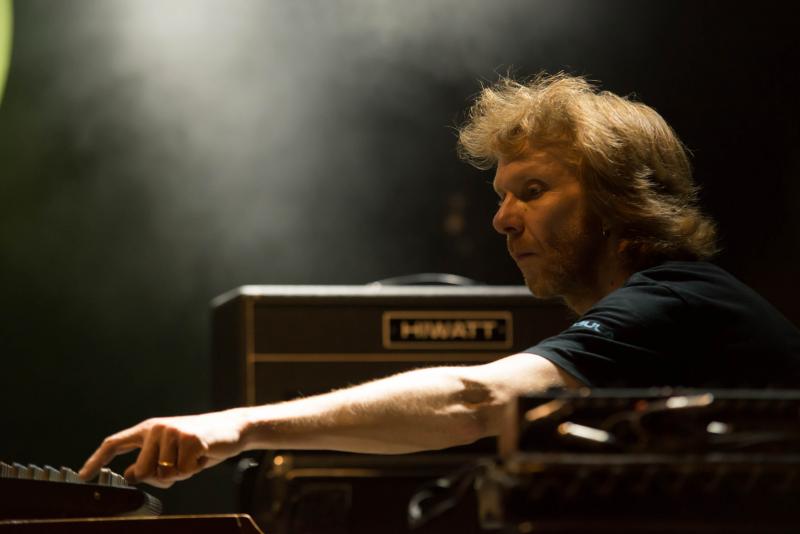 With its three fine releases to date—including the recent vinyl-only, Live at the BBC (Rune Grammofon, 2012)—Elephant9 was an obvious choice. The combination with Fiske was great, and propelled the elephant to even greater power. Leaving Energimølla, the swirling band could still be heard, driven by the relentless Lofthus like a steam engine. Energy was generated on the highest level.