By NENAD GEORGIEVSKI
January 31, 2010
Sign in to view read count 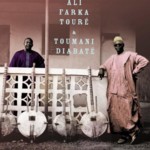 Profound knowledge of African music is not a must to enjoy Ali and Toumani. This recording is the second collaboration between two legendary Malian artists, the now-deceased Ali Farka Touré and master kora player Toumani Diabaté. Ali Farka Touré has always been a truly exceptional and original guitarist and even in his death he remains the symbol of African guitar, as he was the first to introduce desert blues to the world. Diabaté is the world's foremost kora player and the leader of Symmetric Orchestra, an African big band that features Diabaté and over 50 other musicians with an idea of modernizing traditional music in Mali.

Their musical partnership was immortalized in the Grammy-awarded In the heart of the Moon (Nonesuch, 2005), which contained unforgettable music and showed a level of communication that was close to magical.

Ali and Toumani is not only a second collaboration between these two Artists, but also a second album with original material—including "Savane" (World Circuit, 2006)—to be released after Touré's passing. It is a final recording for him as well as for Cachaíto Lopez, the bassist from the Buena Vista Social Club Orchestra and a guest collaborator on both albums.

Ali and Toumani once again shows that the two artists are like minds and their playing is brilliant and most importantly, unified. There is an alchemical connection to their playing that makes it deeply creative. Even though the music is deeply anchored in the folk traditions of Mali, this is gripping music that penetrates into new spaces by the searching energies of its protagonists. For the most part it is largely improvised, but they are perfectly capable of landing on unison themes with a puzzling precision.

The music is soothing and quiet but brimming with life. It is calm but intense; passionate but peaceful. Just like its predecessor, Ali and Toumani will certainly join the ranks of recordings that are "beyond criticism."