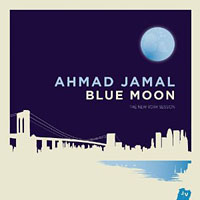 Ahmad Jamal—senior statesman of jazz piano—first recorded 60 years ago. That he's still producing records of great energy, imagination and flair every couple of years is a remarkable testament to his singular talent. Blue Moon broadly follows the formula of It's Magic (Dreyfus Records, 2008) and A Quiet Time (Dreyfus, 2010); a few Jamal originals, a handful of timeless show tunes and popular numbers from bygone years, plus a nod to the jazz cannon. According to the liner notes the music is reminiscent of Jamal's classic Chess/Impulse! years, and whilst true to an extent, what's more notable is the burning intensity of much of the music.

Since Idris Muhammad retired Jamal has yet to settle on a single drummer, utilizing Kenny Washington, Troy Davis and here, Herlin Riley. Riley continues the line of great New Orleans drummers who have graced Jamal's ensembles, but he's no stranger, having played with Jamal from 1984 to 1987. He forms a particularly subtle rhythm team with bassist Reginald Veal, caressing the ride cymbal for long periods.

Veal is recorded rather low in the mix, and his finesse is felt rather than heard for the most part. Only occasionally do he and Jamal connect with the sort of mesmerizing empathy shared by Jamal and his bassist of 29 years, James Cammack. Percussionist Manolo Badrena almost engulfs Riley and Veal at times, though his effusive Afro-Caribbean rhythms inject swing, in contrast to Jamal's more fractured rhythmic pulses.

Of the three Jamal originals, "Autumn Rain" and "I Remember Italy" sit comfortably amongst his greatest compositions. The former is rhythmically light and spacious, and showcases the pianist's ability to alter the tone of a piece in a second; elegant and gently spun one moment, grandiose and sweeping the next. "I Remember Italy"'s blue-tinged nostalgia revolves around a melody as pretty as the Tuscany hills. It's a melody Jamal returns to time and again, in between passages of continual motivic invention. "Morning Mist," on the other hand, spends the first three minutes finding its way before Jamal releases the melody. Despite lovely pianistic flourishes and no little drama, it's too thematically choppy to be truly memorable. Billy Reid's "Gypsy" is also frustratingly start-stop.

Veal's compelling bass motif ushers in the altogether more satisfying "Blue Moon," Rogers and Hart's 1944 classic. Recorded innumerable times as a ballad over the years, Jamal's quartet really shakes it up and dusts it down with rhythmic panache. It's difficult to recall a more beguiling, or more grooving version of this standard.

In similar vein, the vibrant interpretation of Bronislau Kaper/Ned Washington's "Invitation" sees Jamal at his most dynamic and inventive. Jamal prefers the term American classical music to jazz—or BAM for that matter—and in truth he sounds like a modern classical pianist of daring, orchestral vision who has imbibed the blues. This 13-minute flight of imagination alternates between breezy lyricism and rhapsodic bravura, and ends with a trademark single piano note, punched out like an exclamation mark.

Jamal is shadowed by Veal on Johnny Mercer's "Laura," but so gently does the bassist tip-toe that it sounds like a solo piano rendition. Nevertheless, it's a welcome island of repose after an hour of percussion-driven music. It also succeeds in capturing the intimacy of those aforementioned Chess/Impulse! label years, which have tended to rather unfairly overshadow Jamal's later, much more extensive—and diverse—body of work.

Riley's fat beat brings refreshing rhythmic contrast on the Lee Adams/Charles Strouse tune "This is the Life." Jamal's understated embellishments of the melody and his light touch—with minimal percussive/rhythmic support—allow the melody to shine through. Veal takes a lovely, singing bass solo while Jamal comps, but this magic moment dies a little prematurely.

On the set closer, trumpeter Dizzy Gillespie's "Woody'n You," Jamal reverts to a percussion driven approach, with a Latin groove, an interpretation which would surely have pleased Gillespie. Jamal is a master of contrasts, and there's power in the quietly stated yet propulsive rhythms, while Jamal exhibits a more leisurely approach in his exploration of the theme.

Blue Moon demonstrates that Jamal's force and creative juices remain undiminished. Jamal is one of classic jazz's great torch bearers, and one of its most daring exponents. It would, however, be interesting to see him interpret more contemporary music, something he did to a degree in the 1970s. With his extraordinary chops, orchestral language and heightened sense of drama, he could work wonders with modern material. Jamal though, has nothing to prove; should he produce more of the same a couple of years down the line, then that would also be reason to celebrate.