BY DAN BILAWSKY
September 25, 2013
Sign in to view read count 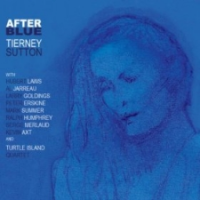 Joni Mitchell and jazz have long engaged in mutualism. Mitchell subtly absorbed the ideals of this music, which were then filtered into her work, and she built musical relationships with some of the finest jazz musicians to walk this Earth; the list of her collaborators—bassist Charles Mingus, saxophonist Wayne Shorter, guitarist Pat Metheny and numerous others—is long and staggering. Jazz, on the other side of the relationship, benefitted from her body of work and interpretive skills. Everybody from pianist Keith Jarrett to vocalist Kate McGarry has taken a stab at Mitchell's music, embracing and exploring the deep wellspring of emotions that exist within her work. Now, vocalist Tierney Sutton joins the list of Joni interpreters, as she sings Mitchell's praises—and songs—on After Blue.

Sutton became an ardent admirer of Mitchell's work after hearing the brilliant Both Sides Now (Reprise, 2000), but she had some trepidation about trying on Mitchell's treasured songs. In the liner notes for this album, Sutton notes, "I knew that Mitchell's music was not something I could glance at and then perform. I had to live with it for years." She goes on to say that she needed to "marinate" in Mitchell's music; that process proved successful. Sutton absorbed the flavors in Mitchell's work, blending them with her own essence during the interpretive process.

Though Sutton is, admittedly, tardy to the Joni party, she's fashionably late. The twelve songs that she visits on After Blue are cleverly arranged vehicles that balance creative impulses with a sense of respect for the material. She demonstrates this time and again, whether bestowing elegance upon "Little Green" with the Turtle Island String Quartet, tackling "All I Want" with that group's cellist—Mark Summer—or reworking the oft-covered "Big Yellow Taxi" into a voice-with-drums number in five. Sutton's captivating "Woodstock" veers closer to the Mitchell template than most of the other performances, but Sutton never resorts to imitation; originality seems to flow through her veins.

While the Tierney Sutton Band—a mainstay on her albums—is noticeably absent, the quality of the music doesn't suffer one bit. In fact, the diversity in musical partnerships here brings something fresh into the picture. A you-never-know-what's-next feeling carries through this album, as Sutton moves from refined, string-enhanced music to hip-and-fun scenarios with flautist Hubert Laws in the mix to guitar-meets- voice encounters with Serge Merlaud. Other key collaborators include drummer Peter Erskine, pianist/organist Larry Goldings, and special guest Al Jarreau, who drops in to add some vocals on "Be Cool."

The news of this album was met with much anticipation in (vocal) jazz circles, and with good reason. Sutton-as-singer and Mitchell-as-muse are like fine wine and cheese: they're two tasty delicacies that pair well together.