Scott Hamilton & Friends: Across the Tracks 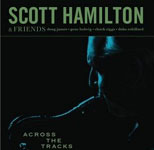 A tenor saxophonist standing foursquare and unreconstructed in the tradition established by Coleman Hawkins, Ben Webster and Illinois Jacquet, Scott Hamilton is considered so uncool in some quarters that to admit you enjoy him is to risk being shunned by hip society.

Now in his mid-fifties and playing a brand of jazz that was at its peak before he was born, Hamilton hasn't deviated from his style since his debut album, Scott Hamilton Is A Good Wind Who Is Blowing Us No Ill (Concord, 1977), recorded when he was just 23. Since then he's made another sixty-plus discs as leader or co-leader—an output, interestingly, which in jazz is matched only by saxophonists directly opposite him on the stylometer, like Anthony Braxton or Evan Parker.

In the process, Hamilton's honeyed sound and easy swing have given all but the most po-faced pleasure. He plays the style he plays guilelessly and with conviction, as though born to it. His music has degrees of creativity absent from the pasticheurs. Retro he might be, revivalist he certainly isn't.

Across The Tracks, produced by Bob Porter and recorded by Rudy Van Gelder at his Englewood, New Jersey studio (hence the title), is an infectious set of mainly up-tempo ballads and blues, on which Hamilton fronts a quartet completed by guitarist Duke Robillard, organist Gene Ludwig and drummer Chuck Riggs. Baritone saxophonist Doug James is added on two tracks, "Parker's Pals" and "Intermission Riff."

The guitar/organ/drums line-up suggests chicken shack soul-jazz, circa 1960—and on one track, an ebullient reading of "Something For The Road," Hamilton adopts an appropriately vocalized and raw tone. But elsewhere he favors the warm, caressing sound, given a languorous vibrato at slower tempos, for which he's best known.

Hamilton is brilliantly served by his band. Robillard's elliptical solos are magic, giving fresh nuances to familiar structures, and even when comping he's worth listening to. James shines on his two guest appearances, particularly the boppish "Parker's Pals," written by fellow baritone player Leo Parker and first heard on Parker's Let Me Tell You 'Bout It (Blue Note, 1962), now available in a fine Van Gelder remastered edition. Ludwig and Riggs, who has played with Hamilton on and off for over thirty years, cook from start to finish.

Forget the style police and give yourself a treat. Scott Hamilton may not stretch the envelope, but he surely seals it with a kiss.

Deuce's Wild; Parker's Pals; Save Your Love For Me; Cop Out; Intermission Riff; Sweet Number; Something For The Road; Blue Turning Grey Over You; Memories Of You.