Sebastian Noelle: Across The River

By BUDD KOPMAN
October 2, 2006
Sign in to view read count 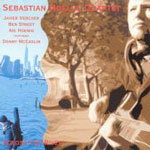 Sebastian Noelle could easily be called an anti-guitarist. The way he approaches the instrument when he solos, combined with the nature of the music he composes, continuously thwarts expectations. He does this not in the manner of Derek Bailey, who almost destroyed the guitar as a reference point. But within the realm of jazz musicians who recognizably play guitar, Noelle's style encompasses virtually none of the standard (expected) things, either physical or musical. Over the course of the record, when he does play a "riff," it sticks out, even though it fits in with the idea of the moment.

This style is absolutely fused with the person and is not something faddish. Somewhat in the manner of Samo Salomon, but even more detached from the instrument itself, Noelle's music floats. A telling example of his chameleon-like ability is that he subbed for Rez Abbasi in Sunny Jain's band, totally fitting in with the Indo-Jazz vibe one night at the Blue Note. Jain said afterward that Noelle was the first American player who he felt could sub for Abbasi and be himself while simultaneously blending in and adding to the music.

The music that makes up Across The River has a delicate, sensual quality, romantic and full of emotions which invite rather than shout, creating an atmosphere in which one wants to spend time. Nevertheless, the tunes all are very highly integrated, and there is not one ounce of wasted energy.

In an interesting twist, Noelle chose to use two quite different saxophonists, Javier Vercher and Donny McCaslin, who almost alternate tracks. McCaslin is a bit more extroverted and has a sharper tone, playing more out front. He's perfect for "Papillon," with its bop-like, twisting lines and higher energy. Vercher has more reticence and overall plays lines that feel closer to Noelle's. However, as if to create expectations only to squash them, the players are asked to reverse form on "Alpha et Omega" and "Liquid Truth."

As a result, while Across The River is Noelle's record, he shares it with the two reedmen. His compositions are so strong that they invite vibrant playing, allowing the leader to be able to show how unique his accompaniment can be. When he does solo, he takes center stage by being totally unpredictable, commenting slyly on what the horns have just done.

Bassist Ben Street and drummer Ari Hoenig provide a solid balance in their backing throughout the proceedings. Since the music does not cry out, much of what they do is understated, but very precise and tight, anchoring the music and simultaneously allowing it to float.

Highly original and brimming with inventiveness, Across The River has the power to entice, soothe and seduce the body, while engaging the mind. Recommended.