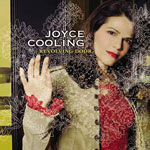 Gibson Guitars' 1999 Jazz Guitarist of the Year, Joyce Cooling, paints a bright and colorful picture on Revolving Door with loving strokes. You might be surprised to learn that this is her portrait of an often dark subject. Says Cooling, "'Revolving Door' is a metaphor for a situation we humans often find ourselves in where there is seemingly no beginning and no end to a problem. It can be a frustrating treadmill with the same path ruthlessly cycling under your feet. The specific 'Revolving Door' that I am referring to in this CD is the cycle of mental illness. Everything from the treatments, the so-called solutions, and the unknown causes, to the inaccurate stigmas of mental illness all suffer from this 'Revolving Door' syndrome."

Cooling's guitar rings out clear and smooth and bright through this Door, with the sounds of such influential jazz/pop guitarists as Larry Carlton and George Benson often shining through. Her accompaniment, especially the cool and fluid electric keyboard shadings from co-composer, arranger and producer Jay Wagner, certainly flatters her playing. Several examples of their keyboard and guitar interplay suggest instrumental outtakes from jazz-rock fusion albums by Steely Dan: The background horn chart in the opening "Mildred's Attraction might come from Aja, for example, and this title track, like the title track to Pretzel Logic, churns into an erudite modern-day blues.

"Come and Get It soars into jazz atmosphere, as Cooling flies around her harmonic range and pauses to aggressively, repeatedly hammer key phrases. But Revolving Door also offers a little more than standard smooth jazz fare. "Mildred's Attraction, for example, concludes in a surprising jam of Brazilian and jungle percussion. Her title track nuzzles against the blues; it's still soft and supple—nowhere near "down and dirty —but undeniably blue in feeling and tone.

Benson's blue light burns through "I Will Always Love You (Ode to the Audience), a grateful solo blues propelled by scatted vocals and companion guitar. "Little Sister luxuriates in acoustic funk that seems to float softly down, as if played from the comfort of her own back porch. As her guitar gently weeps (not so much in the notes she plays but in the way that she plays them), "Sister feels like one of her most "for real songs on this set.

Mildred's Attraction; Cool of the Night; Revolving Door; At the Modern; I'll Always Love You (Ode to the Audience); Come and Get It; Little Sister; In Case of Rain; Jesse's Bench; One Again.