By FRIEDRICH KUNZMANN
December 12, 2019
Sign in to view read count 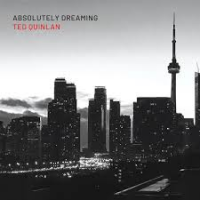 Toronto-based guitarist Ted Quinlan is a Canadian institution on the instrument and constantly in high demand. Over the years he has performed as a sideman alongside famed musicians such as Chet Baker, Jimmy Smith or Dave Holland, while keeping busy as a leader. His guitar tone varies from clean and smooth to fuzzy and rough, channeling Wes Montgomery as much as Allan Holdsworth in careful adaptation to the respective composition. On Absolutely Dreaming Quinlan presents nine originals which account for over an hour of engaging melodies and instrumental storytelling. Like his tone, the music here is diverse but coherent.

One specific strength Quinlan demonstrates throughout the album is the elegance of driving a fine line between fusion and more acoustic-sounding bop. The opener "Cheticamp" is representative of this aspect; in tight interplay with the rhythm section, the guitar comfortably slurs along the contours of the progressions with a tone which is both round and heavy. The musicians share inviting gestures and are in perfect synchrony with each other. "X Marks the Spot" drives a similar agenda, though to a more edgy and rock-oriented vibe, while "Black Prince" is a true brother in sound to the opener.

When the pace slows, Quinlan's tone widens and gains treble. Fewer notes grow to a bigger impact. "Not What it Seems" is a slow modal-jazz exercise with a mystic atmosphere to it and finds Quinlan and pianist Brian Dickinson trading precise and sparse solos. The ballad "Twilight Sky" is similarly intimate, though performed and composed in a more blues-based fashion. Quinlan and the band shine in a spacious and breezy setting, cutting back on the density and allowing the meticulous production to capture every note.

The acoustic guitar overdubs on the closer, "La Bionda," have an odd effect sequenced in an album that otherwise completely refrains from creating the idea of more than four people being involved. The sweetness and laid-back nature however come as a welcome change and reveal another well-wrought song. The preceding title cut, "Absolutely Dreaming," is an intricate composition, putting all of the band's virtues on display and therefore in need of a lighter ambiance subsequently.

With Absolutely Dreaming Quinlan has created a fine recording of mainstream jazz which demonstrates his dexterous capacities as a composer and musician while also keeping things catchy and easy to grasp.