Anemone: A Wing Dissolved In Light 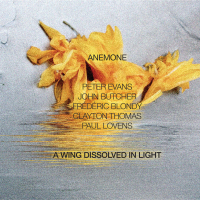 Meetings of peripatetic improvisers form regular occurrences in these straitened times, but by uniting a quintet of musicians from three continents, each from different countries, Anemone takes the custom to extremes. Of course free improvisation provides a touchstone which transcends any cultural or language differences. Perhaps the surprise comes in realizing that A Wing Dissolved In Light, recorded at the 2013 Tampere Jazz Happening, was not a one off but rather merely the first document of an enduring project begun in 2010. Certainly the nature of the output merits further encounters in spite of the logistical difficulties which must ensue.

Evidence of the understanding which has developed emerges quickly in the fast changing configurations between the five pieces. The evolving subgroupings offer an alternative to the collective paradigm in which each partner participates most of the time. As a consequence there's always something new, the variety of transitory moods often provoking the thought: how did we get here? In particular the interchange between English saxophonist John Butcher and American pocket trumpeter Peter Evans constitutes a wonder of the modern world. Both bring an inherent musicality to their exploratory technical advances which engages as much as it astounds.

Straight away from the opening "Part I" tension arises from the contrast between Lovens' shimmering cymbal pulse and the elongated trumpet and tenor sustains. Later lingering circular breathed siren tones from soprano saxophone and trumpet can't help but get the heart racing. Blondy becomes more prominent on " Part II," enjoying what almost passes for a piano trio, where he pitches midway between Bud Powell and Cecil Taylor, paced by Thomas' dexterous commentary, although Lovens doesn't wholly buy in, accentuating tappy timbres rather than beat. It's a masterful performance in which the quintet fully but sensitively exploits the opportunities afforded it.