Jason Ajemian: A Way A Land Of Life 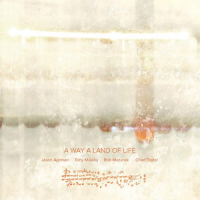 While the talented cast dazzles, what comes across most strongly on this 42-minute LP is the controlling mind of bassist Jason Ajemian. Part of the fertile underground scene in Chicago, Ajemian has featured with Ken Vandermark and Matt Bauder, as well as cornetist Rob Mazurek's Exploding Star Orchestra. But none of that really prepares one for the strength of this quartet date. The spirited interaction he draws from a front line of Mazurek and tenor saxophonist Tony Malaby is one of the main pluses on this excellent set, effortlessly underpinned by drummer Chad Taylor who covers all bases between texture and time.

In fact there is an extraordinary degree of tandem playing by the two horns, whether in rowdy counterpoint or rollercoaster unisons which slowly break into simultaneous soloing. "White Light" establishes that template right from the git go with just over a minute of continuous bickering interchange. Such heady discourse, supplemented by bass and drums which are largely free, ensures an intricate four way conversation. Even when they move into open form, there is still composerly intent in terms of how the leader deploys his resources. Ajemian evokes a variety of moods from bewildering to melancholy but with bass or drums often in opposing camps which creates an undercurrent of tension and uncertainty.

Although Ajemian anchors proceedings in a stately fashion, his solo on the mournful "Living The Sky" recalls Charlie Haden in that every note arrives imbued with gravitas by dint of its careful placement and the silence surrounding it. Arco, he becomes even more expressive switching between pure tones and abrasive scrapes. Malaby's brawny broad brush tenor continually threatens to veer into distortion and controlled overblowing, as he does on "In The Imaginarium," while Mazurek splutters legato streams, sliding from one pitch to the next in a manner suggestive of the late Roy Campbell, before culminating in declamatory flutters, on the same track.

"Yes We Know" proves a reflective but slightly astringent ballad in which the horns alternate. Both the leader and the cornetist also unleash electronic effects, largely subtle echoplexed shimmers which increase the ambiguity, as on the elegiac finale "That When You Come, We Die," to complete a great album with a distinctive sound. One can wonder why such powerful music has taken so long to surface, having been recorded back in December 2006, but let's just be glad it has.

White Light; Living The Sky; All Ups; All Nights; In The Imaginarium; With A Mythador; Occasionally; Yes We Know; That When You Come, We Die.