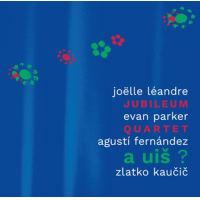 Though the instrumentation on A Uiš evokes the classic jazz quartet, the outcome resides a world away from that tradition. To celebrate 40 years as a professional musician, Slovenian drummer Zlatko Kaućić assembled a quartet of top drawer improvisers for a 45-minute collectively navigated journey, recorded live at the jazz festival in his home town of Cernko in 2018. Each boasts an unrivalled track record and the discography to prove it. Each is a groundbreaking leader. British saxophonist Evan Parker is celebrated for his radical overhaul of what the saxophone might do. French bassist Joëlle Léandre matches her boundless imagination with peerless technique, while Catalan pianist Agusti Fernandez leaves no part of his instrument untouched in his unfurling artistic expression.

Kaučič himself has joined this rarefied company relatively late in life, but has found a champion in the Polish Not Two imprint, which issued Diversity (2018), a five CD set to demonstrate his breadth as a performer, that also features Parker and Fernández. Even that's not the first multi-disc offering dedicated to the percussionist. That honor goes to the triple album 30th Anniversary Concerts (Splasc(H), 2009) which counted saxophonist Peter Brötzmann and singer Saadet Türkös among the participants.

The single 45-minute piece begins in relaxed discourse, as if the foursome is reacquainting, before pulses of activity coalesce into helter skelter four way exchanges, which touch on spiky textural interplay as well as careening momentum. During the performance the group naturally evolves into various duo and trio permutations. With four masters of the genre, an innate sense of how to manage the transition from one episode to another is a given. Their interaction is mercurial, responsive and constantly refreshed. As much as playing, this involves knowing when to pull back, and then when rejoining whether to redirect or affirm the trajectory.

Special moments include Léandre's smeared arco sighs, which entice Kaučič to echo with scraped cymbals. In the agitated quartet which ensues, one slurred pizzicato phrase is passed around and morphed by Fernández and Parker so quickly it's impossible to tell who is reacting to who before it's lost in the ether, as everyone moves on in a seamless flow. A further highlight arrives courtesy of Léandre's shift from the deepest resonance to high harmonics as Fernández tolls mournfully, her wavering bowing braiding together with Parker's querulous circular breathed tenor sinuosity, both exploiting overtones in an unbroken stream.

A series of short-lived crescendos create an intermittent wall of sound, until they end on the thunderous climax which caps what has been a thrilling ride.