Tom Ollendorff: A Song For You 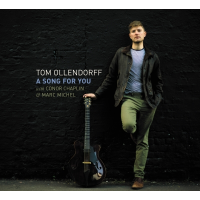 They say lightning never strikes in the same place twice. But sometimes it does. When it comes to new jazz guitarists of more than average talent, London has produced two in fairly rapid succession. In spring 2020, Rob Luft released his immaculate and uplifting sophomore album, Life Is The Dancer (Edition). Exactly a year later, Tom Ollendorff is releasing A Song For You (Fresh Sounds), a debut which delivers much and promises even more.

Ollendorff and Luft have similar signatures. Both are evolutionary rather than revolutionary stylists. They bring quantities of freshness to the tradition but they do not rethink it. In this they resemble, say, Pat Metheny more than, say, Eivind Aarset, although Aarset's high-register neo-trippy lyricism has echoes in the playing of both of them.

On A Song For You, Ollendorff presents sophisticated, melodic music of seraphic beauty. All but one track are Ollendorff originals. Most last less than five minutes. There are two extended pieces: the ballad "Not In These Days" clocks in at eight minutes, and the sole relatively kick-ass burner, "XY," is almost as long. Both fly by. Vernon Reid's much covered evergreen "Autumn In New York" receives a memorable reading (on a par with pianist Al Haig's once heard, never forgotten one on his 1957 Counterpoint album, Jazz Will-O-The-Wisp).

Ollendorff is accompanied by his regular trio, which is completed by bassist Conor Chaplin and drummer Marc Michel, and he co-produced the album with Fresh Sound's Jordi Pujol. A Song For You is a stunning debut. Following Ollendorff's progress looks like it will be time well spent.