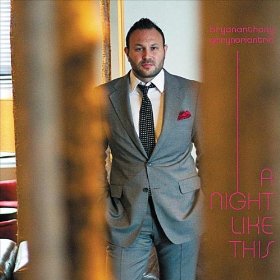 It would be easy to give a pass to vocalist Bryan Anthony if he had wanted to do a no-surprises take on standards. Anthony has become something of an expert in the art-of-the-old, having occupied the vocalist chair in various ghost bands like the Glenn Miller and Tommy Dorsey Orchestras, but he clearly isn't content to simply interpret the Great American Songbook with a decades-old layer of musical dust lying at the surface. With his mellifluous vocals gliding atop fresh arrangements, Anthony puts a new coat of paint on these pieces, simultaneously lending them a timely and timeless quality.

Love, in all its complexity, is the topic of choice on this record, and Anthony plays the role in each song to perfection. Youthful zest and the thrill of possibility reside in some of these pieces, while an "I let her get away and I've only got my memories" attitude appears elsewhere. The program leans heavily on surefire winners from the likes of Cole Porter, Irving Berlin and other classic songsmiths, but Anthony also sneaks a few simpatico originals from pianist Gary Norian into the mix. "Your Dreams Are On Their Way" is a wonderful lullaby that would have been perfect for Bing Crosby, had Norian been around back then, while the "here's to my girl" theme of "The One I Most Adore" is just as good as any of the set's certified classics.

The relationship between Anthony and Norian is central to the success of this music, as both men seem to meld their musical and emotional sensibilities into a single entity. In some places, there are references to Frank Sinatra and Bill Miller, while other pieces bring to mind the Kurt Elling-Laurence Hobgood connection or, as Francis Davis mentions in his liner notes, the pairing of Tony Bennett and Bill Evans. They mine Norian's originals for all that they have to offer, but their slow journey through "They Can't Take That Away From Me" is the standout vocal-piano collaboration. Both men peel back the excessive musical pleasantries that often surround this song, bringing greater emotional weight to a number that has been done ten thousand times, but never quite like this.

Other likeable surprises—an odd-meter appearance on "I'm Confessin" and double-time excursions on "Secret Love"—keep things fresh, as Anthony entertains all of love's offerings. Relative youth and the voice of experience rarely arrive in a single package, but Anthony appear to be the rare exception, and his vocal talents—ever-present throughout this album—deserve to be heard by a larger audience. He's simply too good to ignore.

I'm In The Mood For Love; A Night Like This; Secret Love; They Can't Take That Away; April In Paris; I'm Confessin'; Stardust; This Is All I Ask; How Deep Is The Ocean; Your Dreams Are On Their Way; The Song Is Ended; What'll I Do; So In Love; The One I Most Adore; Falling In Love Agin; Sleep Warm; A Night Like This [Encore].