BY JOHN SHARPE
January 5, 2016
Sign in to view read count 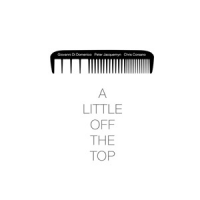 The episodic side long "Golondrina" provides a good example of that ethos at work. It begins with tentative clipped piano notes, which bring to mind Cecil Taylor, accompanied by Jacquemyn's taut pizzicato and Corsano's clanking drums. Although evoking a conversation at first, the pace gradually picks up. Strings thwack on wood as the bassist's scratchy physicality predominates. A jazzy sequence follows with Di Domenico's undulating piano vying with a fast plucked bass counterpoint and tappy pulsing cymbals. A very quiet percussive section awash with indeterminate sounds signposts another dominant trait as the dynamics vary widely both on this and subsequent cuts. The piece ends with Di Domenico again summoning Taylor amid a blizzard of slurred bass notes.

At times they reimagine the piano trio to such an extent that it becomes three companions in consort who just happen to play their respective instruments. Corsano gives the impression that he is always on the search for unconventional textures. In "Tiburòn" Di Domenico matches the drummer's initial thicket of small gestures by delving under the bonnet for a mixture of xylophone cadences and quivering metallic scrapes, recalling the work of Agusti Fernandez.

"Slick Back" starts as if the whole construction consists only of foundations with dark piano rumblings and bowed bass underpinnings. A pealing tremolo signals a swerve in which the pianist, prone to occasional lyrical fragments, suggests distant shades of Leonard Bernstein's "America." Like the rest of this intriguing set such transitions require close listening.