BY DAN BILAWSKY
January 5, 2016
Sign in to view read count 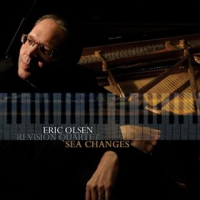 Many classical-jazz crossover projects come off as half-baked exercises in compromise, uncomfortable in the attempt of marriage and painful to observe. This one doesn't. Pianist Eric Olsen put together a first-rate foursome—the aptly-named ReVision Quartet—to perform revamped takes on the music of Jean Sibelius, Frederic Chopin, Georges Bizet, and Olivier Messiaen, among others. His artful arrangements take note of the source material without simply recycling it, his band mates do a fine job of navigating their way through these pieces, and everything sounds natural as can be. If only every jazz-meets-classical project could work so well.

The album opens with "Be Now My Vision," based on the Irish hymn "Slane." It's a brooding yet polished swinger in five that grooves in all the right ways. Don Braden's tenor is tough without being aggressive, Olsen moves from strong-handed comping to more measured places, and the rhythm team of bassist Ratzo Harris and drummer Tim Horner does a fine job fanning the flames of intensity without ever going overboard. A sensitive, Brazilian-laced take on Gabriel Faure's "Elegy" follows. Braden's gentler side shines through while the band glides along in mournful-cum-hopeful fashion.

As the journey continues, the listener is treated to a gentle "My Man's Gone Now," questionably tied to the album theme because of its opera-based origins. Then there's a fusion-fashioned take on "Carmen Prelude," a light touch trip through Messiaen's "Immortality" that features a notable solo from Harris, and a big head-scratcher—George Harrison's "Something." That last number doesn't really fit with the classically-inspired mandate, but better not to nit pick on that point. It works wonderfully as a bright-eyed swing waltz, sitting comfortably within the mix. The final third of the album includes a calmly coasting "Finlandia" that puts Braden and Olsen in the spotlight, an upbeat Chopin waltz, and a funky and raunchy, plugged-in take on "In The Hall Of The Mountain King" in seven.

In creating this project, Olsen proves to be an expert in the art of musical transfiguration. The familiar is truly born anew in the hands of the ReVision Quartet on Sea Changes.

Be Now My Vision; Elegy; My Man's Gone Now; Carmen Prelude; Immortality; Something; Finlandia; Waltz In C# Minor; In The Hall Of The Mountain King.