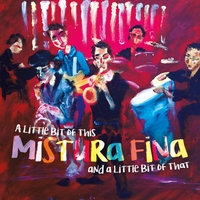 Over the last few decades, Denver, Colorado, has been recognized as an American renaissance city with a burgeoning jazz scene. The positive economic development of the state has resulted in an influx of new businesses, residents, and tourism, and the city is proud of the premier jazz venues, and local musicians with impressive talent. Latin jazz has been very popular, due to Colorado's ethnic diversity, and through the efforts of Denver radio station KUVO, which has successfully tapped into this audience, by promoting the music.

Mistura Fina is a Denver based Latin jazz ensemble founded and directed by drummer/percussionist Frank Ayala, and saxophonist Alex Nekrasov, back in 2000, the core band supplemented by an array of guest artists. The aptly titled A Little Bit Of This And A Little Bit Of That, is a stimulating journey through the vast influences and contributions of Caribbean, Central and South American music, melded with jazz, and the quintessential rhythms of Africa.

It is appropriate that the opening track "Centro Habana," is an ode to the Cuban capitol, as Nekrahov, the principal soloist in the outfit, along with trumpeter AnDré Mali, another founding member of the group, establish their impressive interplay. The Brazilian connection is evident on "Baiao," with its accelerated tempo, and highlighted by veteran trumpet man Hugh Ragin joining Nekrahov in lead roles. Continuing the Brazilian current, are two compositions by Milton Nascimento, "Don Quixote," with Nekrasov switching to soprano for added exotica , and "Cravo E Canela," presenting the indigenous single-stringed berimbau combined with the rain stick, for a tropical jungle excursion. Pianist Michael Shea participates on both of these numbers, and his accompaniment is vital to the performances. Shea demonstrates his songwriting skills with "Days Like That," a sophisticated swaying number where Ragin makes a reappearance on trumpet.

Argentina is represented with an ode to tango legend Carlos Gardel, "Candombe Para Gardel," with entertaining lyrics and vocals by Ricardo Peña, Ayala playing the candombe drum, thus the song title. Peña returns to sing on "Sud Africa," which is enhanced by the poetry reading of Zay Rios, amidst soft chanting by Amy Biondo. Mali returns to play an intoxicating trumpet on this tune, entwining the vocals with melodic phrasing, in true South African fashion.

They delve into the songbook of esteemed Cuban horn man Paquito D'Rivera for the rumba flavored "El Cura," and "To Brenda With Love," both performed at scorching speed. As expected, Nekrasov and Mali mutually rise to the occasion, made possible by the solid anchoring of Eduardo "Bijoux" Barbosa on bass. The repertoire closes with "Corrupio," a relaxing rhythmical concoction, the cadence provided by a pulsing shekere, augmented by the tandem guitars of Leonor Hprian and Thelonious Bone.

Mistura Fina, translated from Portuguese, means a fine mixture, and that is exactly what this recording offers. The group's last release was Proud Spirits, Humble Heart, in 2003, so it's been a long time coming. Ayala and company, in the meantime, have been paying dues and clubs in Denver and vicinity, becoming a musical force to be reckoned with, and hopefully this record will award them the ample recognition they deserve.