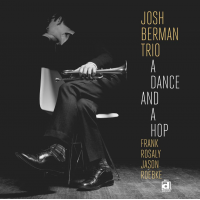 There is a permanent exhibit at the Art Institute of Chicago of 68 miniature rooms. These dollhouses for adults recreate American, French, and English rooms from last century and three centuries ago at a scale of 1 inch to a foot. Visitors lean in to marvel at the amazing detail. Drapery, carpets, and tea cups are reproduced with uncompromising skill. Same can be said for A Dance And A Hop from cornetist Josh Berman. His vest-pocket music approach invites you to listen at an angle, bent toward his specific musical details.

A key player in the vibrant Chicago jazz scene, his cornet can be heard in vibraphonist Jason Adasiewicz's Rolldown, The Chicago Luzern Exchange, Ken Vandermark's Audio One, and the rotating leader ensemble Fast Citizens. This, his third release as a true leader follows the octet recording There Now (Delmark, 2012) and his quintet Old Idea (Delmark, 2009).

The music here, although fully composed, feels off the cuff. That is, until you recognize just how tight this trio is. Berman chose bassist Jason Roebke and drummer Frank Rosaly, two players he has a long history with, as collaborators here. They negotiate the opening track "Hang Ups" with its incongruous jagged-to-serpentine course with an attention to detail that supposes Berman's slurred cornet and trot to gallop lines are the norm. Each piece here is miniaturized shout from Ornette Coleman enunciated through a Bill Dixon filter. Berman has the knack for making sense of an extended trumpet technique within a melody. He brings it home via familiar forms, as in "Blues," or the lazy coolness of "Today's Date."

From thirty thousand feet this music is nondescript. But close up, the physicality of Roebke's bass and the engaged swing of Rosaly's drums ignite the cornetist's language. His dances included not just a hop, but a dash, a bolt, a scurry and a slide. The details here make for an intoxicating experience.