By MIKE JURKOVIC
February 1, 2020
Sign in to view read count 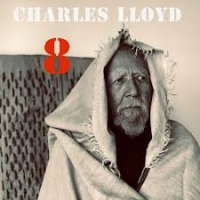 A staggering statement of will and love, 8: Kindred Spirits (Live at The Lobero) big bangs from thin air with "Dreamweaver," a twenty-one minute excursion that doubles down on Charles Lloyd's casually grand schemata that anything and everything goes, that as long as we're all in the music's same head space we can know peace. It's how he's gotten by to where he is in his moment: balancing life's blues and cantors, its whiplash and zeal, within a free-form framework accessible to everyone's ear and, by way of human biology, everyone's head.

Like infant song, like whale song, Lloyd's first words on his eightieth-birthday album is a wail. From there each player steps into the leader's orbit, holds his own against Lloyd's inevitable, gravitational pull, then downshifts into a Grateful Dead-like rush to tumble and calm, riding the impossibly good vibe all the way through "Requiem" and beyond. This is a chance to celebrate that Lloyd has thought larger thoughts than many of us and was never afraid to let us in on them. So "Requiem" recounts the birthing process while the rest of the two or so hours examines how we take our post-natal hours out to party on.

A biting-at-the-bit Lloyd and his generational side-kicks, the impossibly effervescent pianist Gerald Clayton, action hero drummer Eric Harland, Jerry Garcia-conjuring guitarist Julian Lage—who, though well versed and nuanced in many musical articulations, provides the rock 'n roll energy that permeates the proceedings—bassist Reuben Rogers whose confident, tethered grooves roam and replenish, and guest, B3 master Booker T. Jones ever know it. This is a full out jam band with a stop or two to catch your breath and then party some more.

Those two quiet stops are immaculate. Clayton is glorious on "La Llorona," turning the pensive, Mexican folk song of an unloved woman who drowns her sons in a river of tears into an artfully crafted meditation, providing an oasis of silence sadly absent from our collective consciousness. Lage doodles balletically alongside him and then Lloyd enters as the voice of the unloved, majestically redeemed. "Part5 Ruminations" falls into space. Harland is subtle brawn while the octogenarian and guitarist dodge and duet.

The two guys go sacred when Booker T. arrives on "Abide with Me," the hymn from I Long to See You" (Blue Note, 2016). Though Lage interprets the spider-like and earthy lines of the song's its first incarnation with Bill Frisell, a greater, empowering spirit is felt in this live setting with Jones and Lloyd hooking up for the first time.

8, with its celebrations of classical movement, Motown, world groove and the Grateful Dead, is Lloyd's symphony. Shifts in meter and mood amble and dance. Jones' layers clouds of B3 for Lage to fly through. Lloyd's flute soars, his sax takes up the many voices of his trip. You haven't heard "Shenandoah" until you hear it in this triumphant setting. As hokey as it sounds, "Forest Flower," first heard back in the 1960s, blooms in era-technicolor in a time of species extinction. "Green Onions" brings a big big smile to the face and a kick in your step. This is a great album, period.