By GLENN ASTARITA
February 16, 2009
Sign in to view read count 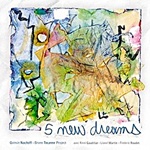 Had this CD been received in 2008, it would surely have made my personal top-ten list. Canadian reed man Quinsin Nachoff aligns with French modern jazz artists, including the co-leader and drummer Bruno Tocanne. Sans a bassist, the four-man horns section generates an excitable string of musical notions, sparked with adventurous shifts in strategy. As Tocanne's resonating drum parts generate a heavy and vibrant bottom end.

One of the more captivating highlights of many can be heard on "Cascade," where trumpeter Frederic Roudet solos in linear fashions within his band-mates swirling arrangements. Think of jagged lines intersecting a rotating circle. Hence, the band paints lucid portraitures of sound, contrasted with gobs of emotive attributes. And in other regions of the album, the musicians flirt with the free realm while skyrocketing into the ozone during the peppery jazz-rock groove titled "QL."

This is the type of product that progressive-jazz aficionados should welcome with open arms and attentive ears as the core foundation attains a near flawless coexistence with the improvisational element. Sparks are flying everywhere! It's a magnificent showcase that imparts a lasting impression.