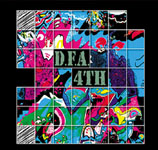 The release of Kaleidoscope (MoonJune, 2007) brought Italian progressive/fusion group D.F.A. (Duty Free Area) back into the spotlight by reissuing, in remastered form, its first two out-of-print discs— Lavori in Corso (Scolopendra, 1996) and Duty Free Area (Mellow, 1999). But unlike many reissues, bringing early material back into release to flesh out an existing discography, Kaleidoscope represented the group's entire repertoire to date. While the guitar/keys/bass/drums quartet did release a third disc, Work in Progress (MoonJune, 2001), recorded live at NEARFest 2000, there was no new material to be found. Despite creating no small stir in the progressive rock community upon its arrival, D.F.A. fans have had to remain content with its small but memorable thirteen-song repertoire for a decade.

Until now. The aptly titled 4TH is the group's first studio disc in nine years, its six complex yet accessible new songs all the more remarkable for D.F.A. being a part-time group that rarely gigs. 4TH is not only the group's best release to date, it's a carefully constructed album that—in its marriage of Italian prog preceded by groups including the jazz-informed but largely symphonic Premiata Forneria Marconi, responsible for progressive rock classics Per Un Amico Numero Uno, 1972) and L'Isola di Niente (Numero Uno, 1974), and the lithe lyricism of British Canterbury groups Hatfield and the North and National Health—continues to carve out a strong niche for a group laying waste to claims that the best groups are full-time affairs, gaining voices and chops through constant recording and touring.

It's also an album of no insignificant growth. 4TH's nearly 19-minute centerpiece, "Mosoq Runa," begins and ends with keyboardist/co-composer Alberto Bonomi's gentle, Mediterranean-tinged acoustic piano, supported by guests Zoltan Szabo (cello) and Maria Vicentini (violin, viola)—a potentially neoclassical move were it not for harmonies more reminiscent of Hatfield's Dave Stewart and Phil Miller. Unfolding gradually, the rest of the group isn't in the pool until nearly the five-minute mark, but drummer/co-composer Alberto de Grandis' well-tuned kit and in-the-pocket yet orchestral groove with bassist Luca Baldassari drives a lengthy melody, played tag-team style by Bonomi, with his array of beautiful-sounding analogue synths, and Silvio Minella's overdriven guitar. Within its ever-shifting rhythmic and harmonic landscapes there's plenty of room for powerful solos from Minella and Bonomi, making it a powerful epic of composition and improvisation that shows just how far the group has evolved in long-form writing since Lavori in Corso's "La Via."

D.F.A.'s references remain clear, but there's also a certain gravitas about the opening "Baltasaurus" and the rest of 4TH's episodically constructed tracks that's distanced from Canterbury's often wry tone, and a contrapuntal complexity that's equal parts Gentle Giant. Still, the almost indefinable Italian flavor of this largely instrumental group, particularly evident on "The Mirror" (one of only two vocal tracks), gives it a voice all its own. Thirteen years since inception, and despite its diminutive discography, D.F.A.'s reputation as one of the best of the new breed of progressive/fusion groups remains intact.