By NENAD GEORGIEVSKI
April 15, 2018
Sign in to view read count 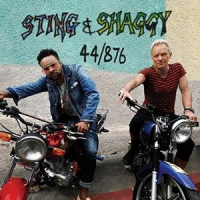 Every summer needs its soundtrack, i.e.—a song or an album full of songs that will remind people that it's good to be alive. The summer is the time to feel good and it has to have its music that would reflect the fun and mischievous behavior that you would remember the summer by. And on this duet record between pop star Sting and dancehall star Shaggy, titled 44/876, a potent cocktail of timeless Caribbean styles come together in a full-scale tropical explosion, colorful, playful, and above all, a good time. What initially began with Sting singing backing vocals on a song for a Shaggy's album soon became good fun and easy rapport that prompted both parties to record a full album together.

44/876 is in contrast with Sting's previous record, 57th and 9th (A&M/Interscope, 2016), which was a classic Post-Police record that emphasized Sting's songwriting mastery. It was colored in the hues of rock music and was a return to form. On the other hand, 44/876 emphasizes Sting's life-long love affair with reggae and ska music that began with the songs from his band The Police. Throughout his illustrious career, many of Sting's songs were influenced by the music from the Caribbean among other styles of music like "Love is The Seventh Wave" and "Englishmen in New York."

On the other hand, that influence wasn't a one way street, as over the years, many musicians from Jamaica paid tribute to Sting's music by covering his songs with the Police, as heard on compilations such as Reggatta Mondatta: Reggae Tribute Album to The Police (Ark 21, 2000) and Spirits In The Material World: A Reggae Tribute To The Police, (Shanachie, 2008.) These songs weren't covered by anonymous musicians but by leading artists from the island from various generations, which showcases the special relationship that exists here.

But Sting can be a master of unlikely musical partnerships. His inclination for sharing the spotlight knows no genre-bounds, ranging from singers Cheb Mami, Craig David to lutist Edin Karamazov or guitarist Eric Clapton.

Produced by Shaggy's longtime producer Sting International and Sting's manager Martin Kierszenbaum, this record is both propelled and colored by an interesting and diverse selection of musicians. As a result 44/876 is a swirl of diverse Jamaican styles, sounds, and themes that bring out the summer festive feel. Highlights are copious. From the opener, the title song, until the closing "Night Shift," the songs are full of pulsating and infectious beats, funky grooves that pair with sweet and playful melodies.

All in all, this record fully exhibits the upsides what can happen when two great musicians from entirely different backgrounds unite in the name making music together. Love is still the seventh wave.

44/876 (ft. Morgan Heritage and Aidonia); Morning Is Coming; Waiting For The Break Of Day; Gotta Get Back My Baby; Don’t Make Me Wait; Just One Lifetime; 22nd Street; Dreaming In The U.S.A.; Crooked Tree; To Love And Be Loved; Sad Trombone; Night Shift.

About Sting and Shaggy