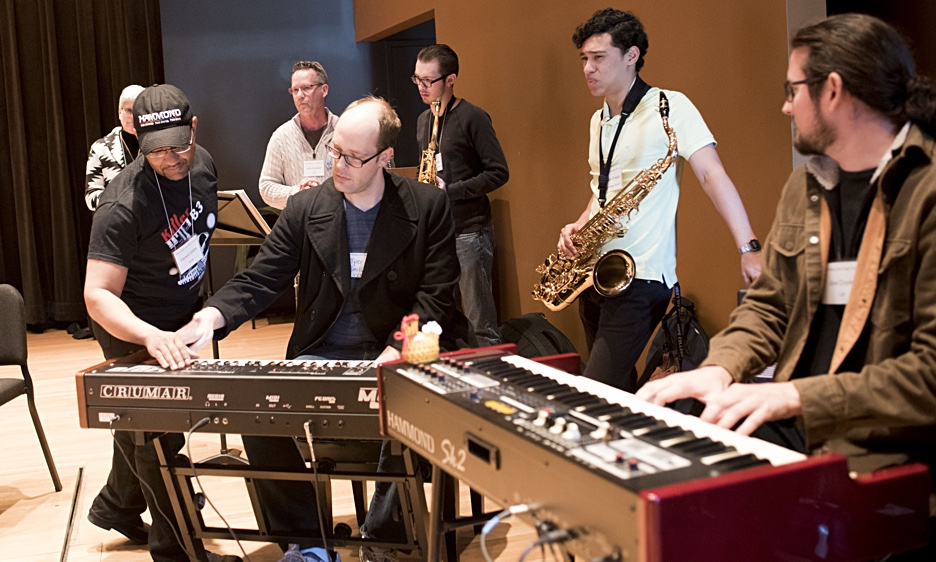 Be it the amazing organ masters or the great guitarists and drummers, the summit has exposed the Hope students and community to some of the world’s greatest players.
&#151Brian Coyle, Hope College Jazz Studies Director

Back in the fall of 2016, a small liberal arts college on the banks of Lake Michigan decided to serve as the epicenter of activity aimed at gaining more respect for the art of jazz organ playing. Over the course of that weekend, artists and students alike would bond over their commonalities and come together to celebrate the history of the Hammond B3 organ and its substantial jazz lineage. All the stars seemed to have aligned for Hope College to take on such a challenge during that first Jazz Organ Summit. They had just the year before opened a new multi-million dollar music facility. Furthermore, director of jazz studies Brian Coyle is well-known for his willingness to foster dreams and set up vital experiences for his students, thus allowing this brainchild of organ master Tony Monaco to take shape.

While about a year and a half had passed since the first summit, the wait was more than worth it as the second annual event recently took place again in Holland, Michigan. This small town and quaint college is really the ideal setting for such an event and a diverse and large audience of attendees managed to make this sophomore effort as good as if not even better than the first. Travelling from far and wide, including folks from Arkansas and Colorado, organists brought their notebooks, video recording devices and talents to campus again with both Coyle and Monaco at the helm of this grand affair.

As Coyle explained to this writer in the days after this year's festivities, "The Organ Summit is a one-of-a-kind event in the United States. It has benefited the organ students in the very obvious ways, but has also benefited all of the students by bringing these amazing artists to campus. Be it the amazing organ masters or the great guitarists and drummers, the summit has exposed the Hope students and community to some of the world's greatest players."

Friday's event kicked off at three in the afternoon on Friday, although things did not go exactly as planned. In town that night for a sold-out performance at Hope's main auditorium, Dr. Lonnie Smith and his trio were slated to give a clinic and workshop. Supported by guitarist Jonathan Kreisberg and drummer Xavier Breaker, Smith started out with a light romp on Tadd Dameron's "On a Misty Night" before opening things up for some questions. After a few quick exchanges, Smith then launched into another ballad number that quickly dissipated as it was clear that something was wrong. Smith was clearly not feeling well and folks rushed quickly to get him backstage and fortunately organist and Doctor Eugene Rivera stepped in to see to his needs.

Having been on the road steadily since January, it seemed that Smith was clearly under the weather. Rivera had served him some food and liquids and the plan was for Smith to get some rest in order to hopefully perform his concert that evening. Without missing a beat, Detroit organ great Gerard Gibbs took over for the rest of the workshop before everyone headed over to the VIP reception at the Courtyard Marriot Hotel. Big E's Sport Bar quickly turned into a convention of jazz organ lovers, with Coyle providing drink tickets and the venue setting up a great spread of gourmet pizzas.

A packed house filled the main auditorium of the Jack H. Miller Center for the Musical Arts that night. Having followed doctor's orders, Smith seemed to be back in action as he took the stage with his bandmates. A freeform opening melded into the iconic "Backtrack," with Kreisberg turning heads literally via his virtuosic guitar displays. In terms of building a solo, he has few rivals, but he also sagaciously uses a variety of foot pedals and other electronic devices to vary the texture and timbre of his accompaniment. A genuine highlight of Smith's recent live recording, All in My Mind, the trio revamped Paul Simon's "50 Way to Leave Your Lover" in a manner that surely would have impressed its composer.

Taken at what drummer Kenny Washington calls "the adult tempo," Lonnie waxed poetic on the ballad "Frame for the Blues." Breaker, who was spelling regular drummer Jonathan Blake, earned his keep here and elsewhere with musically responsive accompaniment and stellar solo work of his own. He is surely an up-and-coming talent worthy of wider recognition. Adding quirky keyboard runs and splashes of color on his electronic keyboard, Smith set up "Alhambra," which proved another great showcase for Kreisberg's blistering guitar. Losing himself in the groove of the final number, Smith proved the real trooper with a fine performance that warmed the hearts of those alarmed by what had transpired earlier.

Just about a five minute walk from the Miller Center, the activity again shifted to Big E's at the Marriot. Tony Monaco, who has been serving as artist in residence at Hope for several years now, would lead his trio through their own set before the ensuing jam session. He had brought with him Columbus guitar legend Derek DiCenzo and Hope's own drum instructor Jeff Shoup would be heard on set. A highlight of the first night's jam would be Tony ushering his students up to the organ in single file style to take their turns on a chorus or two of Jimmy Smith's "Back at the Chicken Shack."

Saturday got started bright and early at nine o'clock with a workshop featuring that's evening's main performer, Gerard Gibbs. A native of Detroit, Gibbs was fortunate to spend time with two iconic mentors, namely Richard "Groove" Holmes and Jimmy Smith. Having worked regularly with James Carter and his own groups, Gibbs has a lot to offer both as a performer and as an educator. His own group, ORGANized Crime features guitarist Perry Hughes, two infinitely gifted musicians in their own rights.

The three gentleman offered advice on a myriad of topics, but it was Dunlap that really held the audience at rapt attention with his stories of playing with Grant Green and other greats. "I got my behind kicked," quipped the drummer in referring to his mentors. "It is through this kind of thing that you develop a discipline." Another jazz legend, Roy Ayers, told Dunlap that "it's all about creating drama." In addition to fielding all types of technical questions in regard to the B3, Gibbs doled up this great recommendation-"Learn from the people that don't play your instrument."

A hard act to follow, Gibbs eventually turned things over to Lonnie Smith, the Indiana native who runs a shop specializing in Hammond repairs and tweaks. He joked about trying to fit everything he planned into a tight hour and a half as the last time he literally talked for almost three hours and could have kept on going. For the session at hand, Smith shared pictures from jobs he had performed and discussed the kinds of common repairs he makes and the condition of some of the Hammonds he sees. The crowd also marveled at the 1963 B3 that he brought with him as the main instrument for the summit.

The rest of the afternoon was spent with Monaco and his trio in a clinic and attendees participating in a large jam session. Guitarist Derek DiCenzo eloquently waxed about dynamics and the importance of complimenting those you are working with. Monaco discussed how important it is to give the melody its full dues and to use it as a basis for the start of soloing before adding additional flourishes. Shoup shared a sentiment that has stuck with him through the years. Stated simply, he was told to by a mentor to "listen louder than you play."

Set up in the smaller recital hall, late afternoon was reserved for "the summit," essentially a jam session overseen by Monaco and Gibbs. A sagacious choice was made to have several consoles available to allow for as many folks to participate as possible. There was Lonnie's B3, Hope's C3, a newer rig owned by Monaco's student Clif Metcalf, and several other keyboards. This writer served as the drummer and enjoyed playing through some standards with a talented array or organists and horn players. A rousing romp through the "Groove" Holmes version of "Misty" brought forth inspired soloing, ultimately ending with some fiery exchanges by Monaco and Gibbs.

Following a break for dinner, Gibbs and his trio with Hughes and Dunlap took the recital hall stage for the evening's main attraction. Displaying their hefty credentials, this superb concert covered a good deal of ground. Stanley Turrentine's "Minor Chant" was ripe for exploration, the rapport between Hughes and Gibbs making for a large sound that proved greater than the sum of its parts. Dunlap showed why he is one of the great drummers of his generation, ever the showman and responsive to Gerard's every move. A tip of the hat to his mentor "Groove" Holmes, Gibbs couldn't resist the urge to offer his own take on "Misty" complete with his signature bass lines. The Beatles' "A Day in the Life" was also given a brilliant update in a rendering that truly told a story.

Another evening of jamming at Big E's brought with it several additional moments of splendor. Monaco and crew kicked it off again before turning things over to student Clif Metcalf. A sophomore jazz organ major, Metcalf is mature beyond his years and it was clear that both DiCenzo and Shoup were enjoying getting to know the musical muse of this talented youngster. Many other attendees had a chance to shine, with Bill Lyons turning some ears with his incendiary licks. Other drummers who participated included Nick Neely, the great Randy Marsh, and this writer.

Fostering a new and valuable relationship with local brewery New Holland, Coyle added a Sunday brunch at the brew pub as a parting shot to this stimulating event. The Hope Organ Trio featuring Metcalf provided the music for the gathering and the opportunity for some final networking. Reflecting on the events of the weekend, Coyle would comment, "It is so wonderful to see doctors, accountants, computer specialists, and such attending this event and expressing their love of this great American music. It's really inspirational for me and I'm happy that our students get to experience the joy of the people who come to this amazing event."