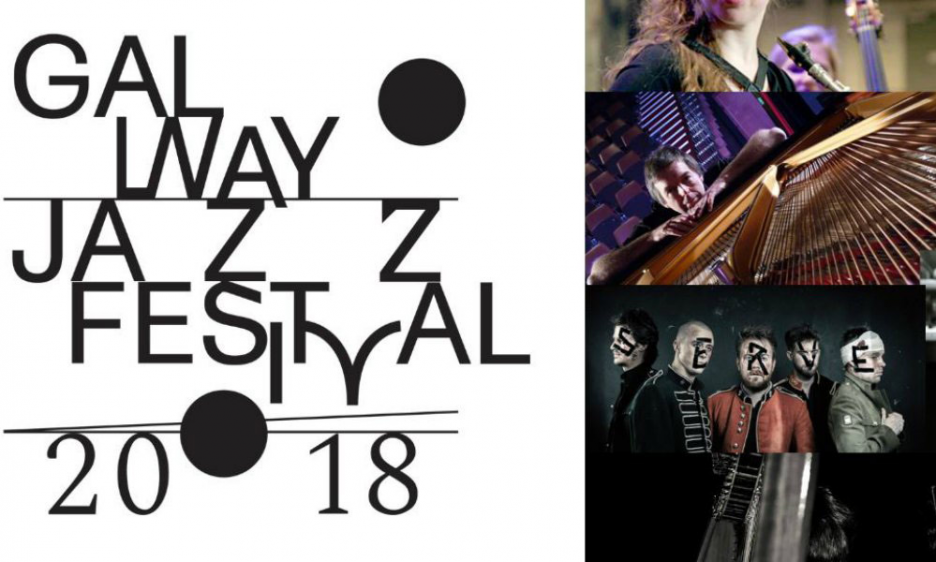 By James Fleming
December 17, 2018
Sign in to view read count

The festival ended there, suspended brilliantly just out of reach, hanging by the finest thread of shining, mercurial music.

On the screen at Galway's Pálás cinema, Thelonious Monk, Louis Armstrong, Dinah Washington and Ray Charles repeated their famed performance from the 1958 Newport Jazz Festival, immortalized in the film reels of Jazz On A Summer's Day. On the rooftop terrace at Biteclub, the venue that closed last on every night of the festival, Conor Guilfoyle's Octet serenaded the crowd with the best that the West Coast had to offer. From Miles Davis's Birth Of The Cool material through Gerry Mulligan's numbers to trombonist Paul Frost's arrangement of "April In Paris," overlapping textures of cool weaved around the fresh day's punters.

The day truly began back in the Mick Lally Theatre with the unique music of harpist Kathrin Pechlof. Alongside altoist Christian Weidner and bassist Robert Landfermann, Pechlof evoked beautiful images of swirling nebulous dust unencumbered by percussion's gravity. The show began with Weidner's wide, open tone and Pechlof's ringing harp plucking and nipping above Landfermann's droning bass. With the dryness of a desert wind, the trio rolled like dunes on the horizon. Moving through the song's textures on the back of the harp's groove, a rhythm emerged from the almost arhythmic introduction. The bass looped through its ostinato, the muscle of the music's limbs. Pechlof picked James Bond-esque chords from the harp's soft nylon strings and the alto clashed gently against her tones. The bass mirrored those notes as the trio closed the tune. Their song had moved by as gently as a breeze but left a mark as deep and lasting as a tempest.

The band stepped across the following tune's treacherously disjointed rhythm, guided by the bass's strummed opening chords. The harp tinkled and shone with all the humor of a drunken angel before turning dissonant beneath Weidner's Paul Desmond-esque sax. The alto eventually took over and brought the band to the end of its perilous journey over the 3/4 rhythms.

Through eerily dark, Alice Coltrane-like glissandi, the trio alighted on "Reihenfolge Der Felder (Sequence Of Fields)." Pechlof swiped at the harp's strings, sending shots of music zinging across the disjointed groove of the bass and sax. Far from the "dry martini" sound of Desmond, Weidner's alto now screamed and cried to the crowd, reacting to the popping needlepoints of Pechlof's high, sharp stabs at the punctuating bass tones. Then it all softened. The bass took on a rounder sound. The harp's note rang full and Apollonian. Weidner sent an ominous breath of air hissing out of his alto. For one split-second, the trio moved as one for the end of the song, the map of the music dissolving into a silence where the fields turn into a wilderness.

Over the next tune's lyrical harp introduction, the trio found firmer ground on the thump of muted bass strings. With the slightest of strums, Pechlof moved down the harp to a low, droning note, where the volume and pace picked up. The tune emerged from murky bass frequencies into the angelic lushness of higher registers. The alto entered with a whispering, breathy tone that was barely audible above the gentle clacking of its keys. The double bass played a single note, holding down the minor key fort. The emptiness of percussion-less space gave a sense of the expansiveness sometimes lost in the rigidity of more traditional combos. Weidner hunched over his sax as Landfermann's bass laid out a silken carpet for the harp's popping notes. He picked a harmonic out of the bass strings as deftly as a bird snatching a berry from the branch. The sax's tone hardened as the groove crystallized and molded the soundscape, a realm cut off in its gestation as Landfermann bowed the final note.

Weidner played in true Desmond form atop the snaking, sinister bass line of the following number, adding a soft, cool edge to the implied menace of Landfermann's playing. After a sudden stop, the trio introduced their finale. They moved through its high, abrasive basslines and low harp notes to sharp pauses at its end. The sax then took up a high note that sang throughout the small theater, packing the room with all the music and poetry that can be carried in a single note. Beneath the harp's jazzy, vaguely Spanish chords in the encore, the bowed bass added a sense of suspense and menace while the sax occupied the role often forced upon it as that of the "cool" jazzman. Yet, in this fresh context, the role took on an extra dimension. As the ending flourish rang out, the crowd stood to cheer this new dimension, a plane that only existed for an hour or so in a small theatre on the west coast of Ireland.

Pechlof's show began in the late afternoon. The day darkened and cooled into evening and the final performance of the 2018 Galway Jazz Festival. The faithful returned to their seats in An Taibhdhearc, where Julia Hulsmann would spread her music out like a seller's crafts in a bazaar. A fistful of punters were there to experience the ingenuity and brilliance of Hülsmann and her bandmates.

Their opener, "You And You," was composed by drummer Heinrich Köbberling. Its opening wide piano chords rang through the small venue and gave a sense of the infinite space lurking between all objects. Hülsmann repeated one note against the subtle dissonance of her chords while Köbberling played with one brush and a bare hand. The sound of flesh on snare drum made a sharp interjection across the piano's gentle, bluesy melodicism.

Over left hand block chords Hülsmann played glistening, classically influenced high notes while Marc Muellbauer's understated basslines anchored the trio's jazz foundations. He slid subtly through his solo, popping harmonics through the air with precision. All the while Hülsmann seemed to barely brush the notes from the keys. She played with a lithe, deft touch, never overpowering her bandmates or hogging the limelight, but always playing with confidence. When the bass joined for the cadence's unison riff, it was a testament to the spirit of cooperation sparking between the bandmates throughout the show.

The following tune was based on a central Asian pop song, followed by "J.J.," the song that lay waiting beyond. Next, the soft, slightly dissonant opening of "Weit Weg (Faraway)" pulled the crowd as if it were being led by the finest of silvery hairs. Muellbauer shook his strings with a lovely wide vibrato. The singing quality of his solo, played in the upper reaches of the neck, evoked the spirit of great vocalists. The lyricism of the trio on this soft, gentle tune seemed to caress the airwaves rather than mold them. Hülsmann moved swiftly from major key licks to a doozy of a minor chord. The brushed, atmospheric drums favored textures and feelings over conventional rhythms, boosting the bass's harmonics and bringing the tune full circle to its opening passage, having lost none of its sheen.

"Soon" moved on an angular, disjointed left-hand piano riff. The tune's curves and contours segued into a reimagining of Radiohead's "All I Need." Hülsmann's piano tone was firm and confident as the group ventured onwards to the repeated chord groove at the song's close. She leaned in close over the keyboard to bounce that one-chord rhythm off the ivories, and a similarly angular groove ushered in "Who's Next." The bass stayed low for this number, growling and rumbling beneath the piano's humorous descending chords, before it leapt an octave, jumping with the song's stop/start rhythm and falling with the chords. Hülsmann's left hand dangled by her side for a moment and then resumed its place on the keys for a glorious clash between the two hands' chords. The groove hardened as she played staccato left-hand chords in sync with the snare. The piano's note rose as the bass's notes fell. Hülsmann then leaned a shoulder into the keyboard, jolting back to an upright position as the song ended sharply and suddenly like a guillotine-drop.

For the last song, "Der Mond (The Moon)," chords overlapped each other, running over the melodic highs of the bass line like a stream over rocks. Over Köbberling's brilliantly tasteful drumming, Hülsmann reached into the piano and started plucking zips and zings from the piano strings while Muellbauer bowed his bass far below those sharp highs. They moved into a repeated, two-chord riff. Muellbauer shot harmonics off with the precision of a sniper's bullets. His scraping, dark bass carried the trio to the song's grand finale. A dissonant closing hung in the air like an avalanche waiting to happen, a distinct contrast to the soft, teasing end of their encore "The Water" by Leslie Feist, the tantalizing fading final notes of the 2018 Galway Jazz Festival.

A jam session in the Black Gate Cultural Centre's basement rolled on into the wee hours and the night would roll on further to day. The festival truly ended there, suspended brilliantly just out of reach, hanging by the finest thread of shining, mercurial music.