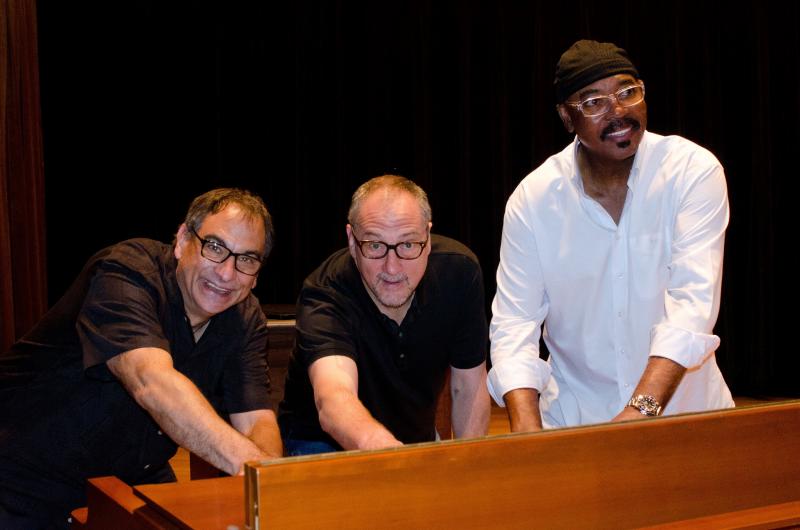 There was little doubt that Monaco and Coyle hit on something special that early September weekend. There were no egos or pretentions. Everyone was there because of their connection with the music.

Located in Western Michigan along the banks of Lakes Michigan and Macatawa, the small college town of Holland is not the type of place you might imagine for a gathering of musicians, students and jazz organ aficionados. Nonetheless, this quaint spot would serve as host to a very unique two-day event that was the brainchild of organist Tony Monaco. Working with Hope College, a small liberal arts school of around 3400 students, Monaco has served as an adjunct professor and instructor to several budding organists. He and director of jazz studies Brian Coyle decided to collaborate in an effort to assemble a program that would rightly recognize the unique place the Hammond organ occupies in the realm of jazz music.

Having just completed construction on the Jack H. Miller Center for the Musical Arts in the fall of 2015, the Hope College campus was the perfect venue to host this inaugural event. A state-of-the-art facility, the 64,000 square feet complex includes two performance spaces, classrooms, practice rooms, and a recordings studio. Several hotels, restaurants, and shopping areas were within walking distance, making it convenient and practical for all the participants. Those wishing to attend all the clinics, workshops, and concerts paid a registration fee for the weekend, while Saturday's main concert was open to the public as well.

Friday's events started in the late afternoon with a clinic featuring the Michigan-based organ trio organissimo. Working together since 2000, this group features organist Jim Alfredson, guitarist Larry Barris, and drummer Randy Marsh. The unit also boasts a catalog of five CD releases and has been heard in such venues as Baker's Keyboard Lounge and at the Detroit Jazz Festival. Their mix of jazz, funk, and rock sensibilities is uniquely fresh and inviting, without being too clever or coy. Getting warmed up with a Big John Patton tune before tackling the Beatles' "Taxman" in 7/8, the trio allowed for questions from an audience of devoted students eager to gain new knowledge. Much discussion regarding the use of the bass pedals and various stops ensued.

Just a few blocks away, the Courtyard Marriott downtown would serve as base of operations for the rest of the evening, starting first with a V.I.P. reception. It was a perfect way for attendees to rub shoulders with the distinguished artists on hand. Monaco was there with his trio mates for the weekend, guitarist Chuck Loeb and legendary drummer Harvey Mason. Also seen were Hammond organ technician Lonnie Smith and Murv Seymour, director and producer of the film Killer B3. Brian Coyle would be overheard several times over the course of the weekend touting that "the hang" was just as important as the music. Indeed, this truly was the case and what developed over the course of the weekend was a sense of family and camaraderie that was unlike anything this reviewer and participant has ever seen.

By nine o'clock Big E's Sports Bar at the Courtyard was jam packed. Large doorways opened directly outside to additional seating areas and the weather was perfect to take in some live jazz from organissimo. The trio played their own set before opening things up for a jam session. Tony's student, Clif Metcalf, amazed the audience with his performance and justified his place as the college's first jazz organ major. Detroit legend Gerard Gibbs, who surprised everyone with his registration to the event, shares the distinction with Monaco of having spent time learning from master organist Jimmy Smith. He would not be outdone, coaxing all sorts of sounds out of the organ during his time spent jamming with Barris and Marsh.

More clinics would be the order of the day starting bright and early on Saturday morning. Monaco would get together with Loeb and Mason for a short performance and discussion of the elasticity of time and the use of bass pedals. Organ technician Lonnie Smith, not to be confused with jazz organist Dr. Lonnie Smith, presented an exhaustive history lesson on the Hammond organ and Leslie speaker, the latter being an invention that was not looked upon kindly by Mr. Hammond. In fact, the two companies would feud for nearly three decades before burying the hatchet in the mid-'60s. Smith presented working models to illustrate how the organ works, pulled off the front cover for further inspection, and discussed his efforts to restore vintage pieces.

Producer and director Murv Seymour allocated his time slot to screening outtakes from his terrific 2013 documentary entitled Killer B3. Inspired by the seemingly endless variety of sounds that this 425 pound beast can produce, Seymour decided to spend several years tracking down some of the best artists for interviews. He wisely let these subjects do the talking, showing off engaging bonus footage that featured Joey DeFrancesco, Trudy Pitts, and Dr. Lonnie Smith.

Giving those playing participants a chance to peddle their wares, Monaco would lead a two-hour jam session later in the day that included the sharing of constructive feedback and instruction. Filling the stage of the 800 seat concert hall, the session was set up with three organs and two drum sets. Supported by guitar student Ivan Akansiima, various combinations performed a variety of standards with everyone seated on stage as to get up close and personal with the music. Gerard Gibbs told the students to "take your time" when developing a solo and also managed a gorgeous duet with Monaco on "You Don't Know What Love Is." Billed as "the testosterone twins" by Monaco, students William Gorman and Clif Metcalf excelled while their teacher looked on in delight.

Following a break for dinner, the headlining concert featuring Monaco, Loeb, and Mason would take place at the main concert hall. This ticketed event was well attended and those on hand were treated to jazz organ at its best. Monaco and crew handled such familiar items as "O.G.D." and "All the Things You Are" with creativity and flair. Dedicated to mentor Jimmy Smith, Monaco's original "I'll Remember Jimmy" was as good a place as any to sample the considerable talents of this gifted organist. Capable of building climactic solos of great complexity, Monaco also knows how to milk the soft moments and his use of the various organ stops is distinct and original.

A breezy run through the waltz number "Bluesette" was probably a nod to its composer, the recently deceased Toots Thielemans. Loeb strutted his stuff with some Wes-like octaves and a warm and burnished tone before Mason would set up a lengthy and resourceful drum feature. Getting at various textures through the use of fingers, mallets, and sticks, Mason built his solo on swells in volume and tempo. By the end, his military snare riffs would seamlessly segue into the iconic "When Johnny Comes Marching Home."

Following a brief introduction, Monaco's student, Clif Metcalf spelled his teacher at the organ to join Loeb and Monaco for an accomplished take on Don Patterson's "S'Bout Time." This was followed by an encore from Monaco and the trio, closing things out appropriately with the Jimmy Smith warhorse, "The Sermon." Further music and "hang time" would be had as the throngs retreated back to Big E's Grill. The Hope Faculty Jazz Group held down the fort as a rotating cast of players impressed the crowd. Gerard Gibbs would steal the show again with a blisteringly fast rundown of the theme to "The Flintstones," with drummer Keith Hall anticipating his every move.

There was little doubt that Monaco and Coyle hit on something special that early September weekend. There were no egos or pretentions. Everyone was there because of their connection with the music and love of an instrument that is currently experiencing a healthy renaissance. Kudos to Hope College for having the insight and perseverance to see through such an endeavor. Here's looking forward to next year's summit!