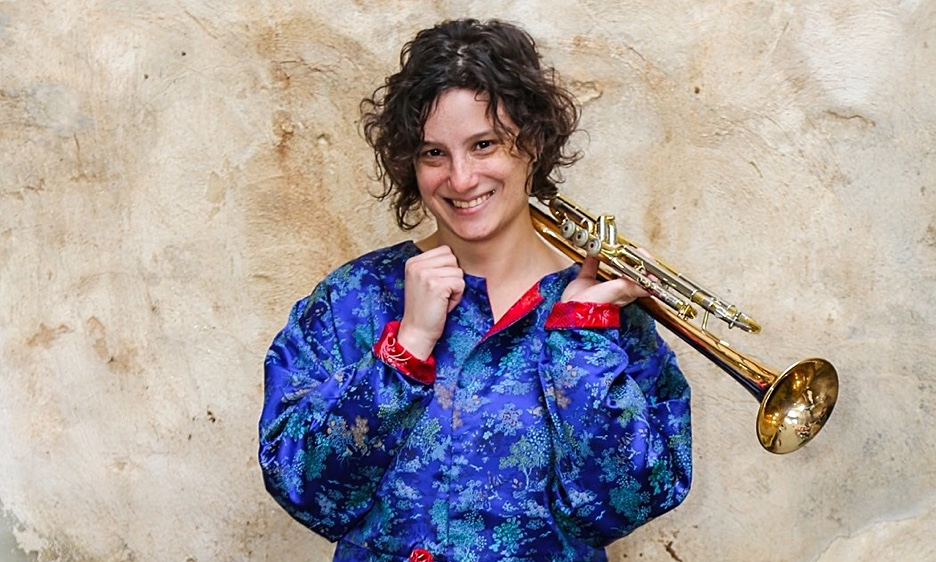 I am interested in creating intricately woven soundscapes that harbor deep grooves and explosive improvisations, with many layers of melodies built upon a strong bass undercurrent.
—Samantha Boshnack

Composer/trumpeter Samantha Boshnack has a fascination with the explosive movements of the very earth we walk upon. Her art reflects the absolute courage required to traverse the world in the Pacific Rim, to feel its pulses and innate rhythms and reach out musically in a global sense. She identifies as a jazz artist, while finding ways to write music utilizing the skillsets of both jazz and classical musicians. In many ways, Boshnack remains an outsider to the very identifiable genres she draws from. She has had remarkable success enabling opportunities for her music to be heard coast to coast both live and through her recordings.

Boshnack generally writes for, and performs with, either her 14 piece B'shnorkestra, or her quintet. She often refers to B'shnorkestra as her "funny orchestra," due to the ever changing instrumentation, and her melodies that tend to flutter in the wind in an angular fashion, with unexpected rhythmic fluctuation and sudden stops. Perhaps more than anything, Boshnack is a storyteller, someone to hip us to the power of the natural world, and the power of one person to exact great change. Her artistic tendencies, her deepest, most powerful notions, would carry no meaning if not for her courage and intense focus to push forward. The result has been a formidable and diverse discography of sounds.

Perhaps her most profound contribution is her album, Global Concertos (Self-Produced, 2016), a collection of five concertos, written for five instruments from five different continents. They include concertos for jazz trumpet, talking drum, latin jazz piano, clarinet and Indian classical vocals. The genius of the work defines Boshnack as a skilled and principled composer from the jazz tradition with global awareness.

She has musically told the story of courageous female journalist Nellie Bly and her activism that exposed the atrocities of mental health institutions during the late nineteenth century. The suite of tunes and the subsequent release, Nellie Bly Project (ARC, 2017), graphically expresses the courage and selflessness of Bly's historic actions. The haunting melodies, and image evoking score, casts a long shadow of remembrance from beginning to end.

This past year has seen Boshnack perform her latest release, Seismic Belt (Orenda, 2019), in Seattle, Los Angeles, and most recently, in New York at Winterjazzfest and Dave Douglas' Festival of New Trumpet Music. The music is abstract, expressing the very life movements of lands encompassing the pacific rim. Boshnack skillfully weaves melodies, improvised solos, and pulses of varying intensity to express arcs, plate movements, and explosive volcanic activity. Seismic Belt has many jagged edges, abrupt explosions of improvisation, angular melodic passages, and uneven endings. "I am interested in creating intricately woven soundscapes that harbor deep grooves and explosive improvisations, with many layers of melodies built upon a strong bass undercurrent," says Boshnack.

The idea for Seismic Belt was actually first conceived when working earlier on her quintet record, Exploding Syndrome (Self Produced, 2012). The opening three movement suite, "Exploding Suite," was inspired by Boshnack's move to Seattle from her native New York state, and her new co-existence living as part of the Pacific ring of fire. Since then, Boshnack has been inspired to "continue to explore writing music based upon these natural wonders."

The fact that she ended up arriving in Seattle at all was strictly by chance. Upon graduating from Bard College in upstate New York, Boshnack learned of diminishing opportunities for artists of her ilk in her intended destination of New York City, and the search for a new home unofficially began.

"My senior year of college, my teachers were telling me that they're struggling now in New York, maybe you should look around, and see other cities. I actually had my eye on Chicago, that's where I wanted to go, but then I came out to Seattle to visit a friend. I also had a teacher at Bard who told me that Seattle had a cool scene, you should check that out. I had this random experience at Patti Summers' club, with Monktail Creative Music Concern. Ahamefule J. Oluo gave me his trumpet, and I sat in, everybody was just so cool. It was just another level from where I was at college, in terms of listening, the music, everybody being so supportive. So I came out here, and I've been here ever since," she says.

Boshnack has returned to her quintet in 2020, working on new material, and performing her established pieces with a new Seattle band. She is joined by multi-reedist Rex Gregory this time around, a fine soloist and section player who arrived in Seattle two years ago from New Orleans. Drummer/percussionist Greg Campbell is new to the fold as well, seemingly a perfect fit to add color and dimension to Boshnack's highly original compositional notions. The switch from a large ensemble to quintet provides a larger canvas for her as a trumpeter, as well as a more interpretive environment for her compositions. "There's a nimbleness to a smaller group that's refreshing and nice," she says.

Further down the road, Boshnack envisions a project with poets Jane Wong and Natasha Maren. Her skillset to apply abstract concept to tangible, accessible art would seem the perfect match for such a notion. The boundaries would indeed be wide considering Maren's disciplines in poetry, video, sound, performance, and immersive and interactive installation. "In 2017, I wrote this piece where I collaborated with a poet, and really liked the experience of going back and forth between words and music, and creating something personal to us both." she says.

Irregardless of where her music takes her next, both she and her art will undoubtedly continue to reside within explosive movements of sound, reflective of he earth under her feet in the Pacific Northwest.