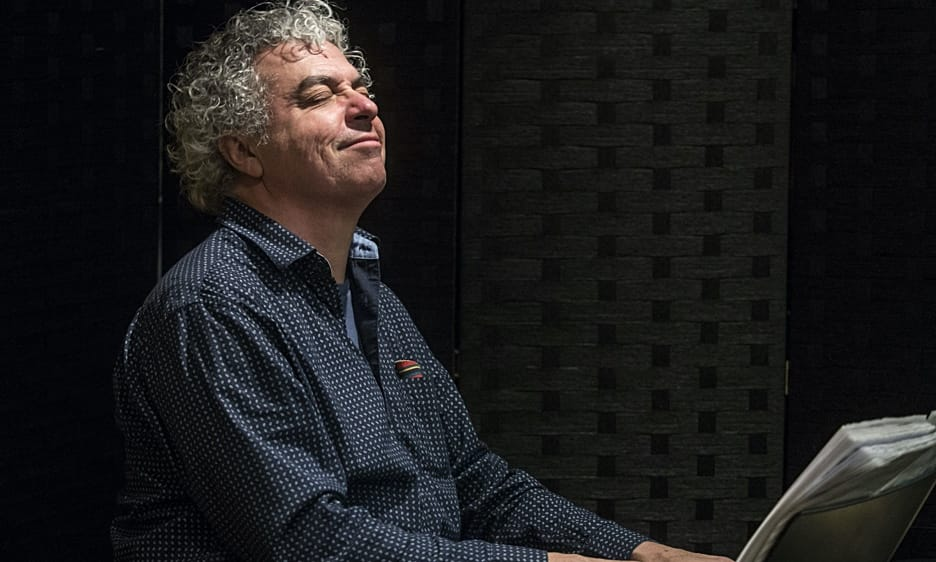 If I started to describe my sound, I would almost feel an obligation to sound how I described. I learned that from Hermeto.
—Jovino Santos Neto

The presence of Brazilian pianist/composer Jovino Santos Neto in Seattle is a fortunate series of unlikelihoods. After passing through Seattle while on tour as pianist in the band of Brazilian master Hermeto Pascoal, he had a feeling about the area, received in passage from the gig in Seattle to Victoria, B.C. There,on the blue waters of Salish Sea, surrounded by high mountains and sweeping maritime vistas, Jovino felt a connection to his surroundings. "It's one of those things, that 29 years later, I still cannot explain. On the ferry, I just looked around at the water and the islands and thought it was so beautiful. I remember thinking that I could live in this place. It hit me in a place where still today I cannot say objectively why," he remarks

The second unlikelihood is that Santos Neto became a professional musician at all. His first foray into North American life was as a student in Montreal, preparing for a career in the sciences. He returned to Brazil after graduation in 1977, with full intent to enter a master's program and become a researcher living in the Amazon working with primates. Enter, a third major unlikelihood. Santos Neto met multi-instrumentalist, composer and Brazilian music icon Pascoal in Rio de Janeiro. His life would never be the same.

"I met Hermeto Pascoal at his house. We shared a little music and suddenly he said, 'I've got a gig this Friday. Can you read?' I said 'Yeah.' It was bullshit. I mostly just played by ear. So he put a chart in front of me and I made a complete fool of myself. He laughed and said, 'You come back tomorrow. We're gonna work a little bit.' That turned out to be 15 years," he recalls.

The connection with Seattle is as well attributed to Cornish College of the Arts. First as a student, and most prominently as a teacher, the culture surrounding that institution has afforded Santos Neto with a rich variety of musical allies to somehow build multiple bridges between jazz and his rich musical partnership with Pascoal. He benefited from the mentorship of composer/arranger Jim Knapp, not only sharpening his composing/arranging skills, but as well informing his ability to take on the responsibility of being curator of the master works of Pascoal.

The quintet that Santos Neto has recorded and toured with over the past 25 years is as well rooted in his grounding experience at Cornish. Prolific bassist Chuck Deardorf headlines that list, a Seattle jazz veteran who has played with a multitude of headliners in his career. He gives the band's sound a viable grounding in the jazz tradition, giving Santos Neto the space to develop a personal style both as a pianist and composer. In current times, the two join as a seamless, yet reactive pair, from which the music is released. Drummer Mark Ivester, and percussionist Jeff Busch as well have a seamless quality to their collaboration. Global awareness with jazz instincts is what Busch brings to the table, with Ivester playing just enough on the kit to keep the ensemble grounded and unified. Ebullient vibraphonist Ben Thomas utilizes his remarkable skills to play as a conduit feeding energy to his bandmates, with a time tested telepathy with Santos Neto.

The band literally sprang to life almost immediately upon the arrival of Santos Neto in Seattle. "Since I arrived, I've hit the ground running. The guys that play with me today, my band, I began playing with maybe a month after I arrived. Chuck and Mark, then Jeff came after that, and Ben a couple of years later. That was really beautiful in that we're still great friends and enjoy playing music together," he says. In terms of its style, Santos Neto speaks in reverent terms. "If I started to describe my sound, I would almost feel an obligation to sound how I described. I learned that from Hermeto."

Santos Neto has an impressive and diverse discography under his name, two featuring his touring band. Por Causa de Você (Adventure Music, 2018) is a tribute to Antonio Carlos Jobim, but better described as an interpretive view of the Brazilian master composer. Current (Adventure Music, 2011), features original compositions and is very close to what you might expect from the band live in the intimate confines of a jazz club, or in front of an expansive dance floor. The music is rich and open, enabling imaginative soloing, while as well freeing the concertgoer to listen intently, or to dance.

What feeds the music of the Jovino Santos Neto Quinteto is of course, this amalgam of jazz music and the music of Brazil that arrived with the band's leader. What must be realized is that both sides of this musical coin are minted with music that is highly interpretive, and so, reflects the here and now of five lives residing in Seattle, Washington. It exudes a joy and sense of liberation that while steeped in world culture, is somehow spoken in a language that speaks to life within the maritime culture of Salish Sea, and the great city built upon it.

View all 20 Seattle jazz musicians you should know.