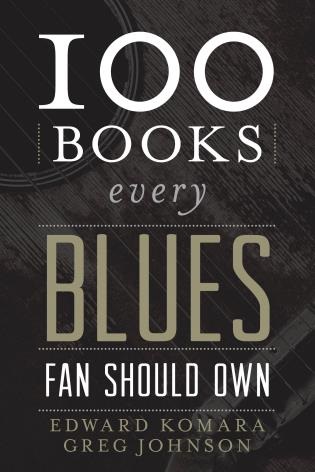 The length of time between a cultural trend developing and its introduction into the academy has grown ever shorter in the last 50 years. Authors Edward Komara and Greg Johnson, past and present blues archivist/music librarian at the University of Mississippi, respectively, say as much regarding blues music in the introduction of their highly inclusive 100 Books Every Blues Fan Should Own.

The re-discovery and ultimate academic invention of the blues occurred during the latter part of the larger American folk music revival (roughly between 1940 and '60). The authors note that prior to 1959 and the publication of The Country Blues (Reinhart/Da Capo) that blues discourse was largely an oral (and aural) tradition.

Since 1959, this oral tradition has been canonically codified in books and periodicals devoted to the blues and blues scholarship in measures large enough to repave Highway 61 from Chicago to Clarkdale. The story of the blues is one that warrants the attention of all the writers who have contributed to its vast bibliography and of all the old and new readers wanting to discover her depth and beauty. But where to start?

100 Books Every Blues Fan Should Own offers a grand place to start. The two authors present a book, first with a brief (and often colorful) descriptor followed by a complete bibliographic citation and book prices for the editions in print. The citations are followed by critical essays about the book: why it is important, what are its strengths and shortcomings. Both authors' works is well balanced and fair minded and above all, informative.

The list, necessarily, is not exhaustive, but the inclusion of an appendix addressing "the books behind the Blues 100" make it nearly so. The authors offer a detailed discussion of how they selected books for the list, listing both inclusion and exclusion criteria, as well as, their justification of ordering. Their writing betrays a librarian's zeal for both research and precision. Their list is inclusive and contemporary beginning with Charter's aforementioned Country Blues (#63), published in 1959 to Buddy Guy's (with David Ritz) When I Left Home: My Story (#100) published in 2012.

Curiously, there are two books nowhere to be found: Stephen Calt and Gayle Dean Wardlow's King of the Delta Blues: The Life and Music of Charlie Patton (Rock Chapel Press, 1988) and Calt's I'd Rather be the Devil: Skip James and the Blues (Da Capo Press, 1994).

Having read the majority of these books, I add my suggestion of the ten detailed by the authors to start with (listed with their brief descriptors:

1. A Classic Gateway to the Blues. Deep Blues (#46) by Robert Palmer (1981). Deeply flawed, Deep Blues remains the most accessible and properly reverent narrative of the history of the blues. A great primer.

2. The Book that Launched the Rediscovery Era. Country Blues (#63) by Samuel Charters (1959). Charters introduced the myth of Robert Johnson, who becomes is the face rural Mississippi Delta Blues. It would not be until 50 years later that Johnson would find his proper perspective. Where it all began (the blues and blues scholarship).

3. Portraits of an Author as a Young Man. Feel Like Going Home: Portraits in Blues and Rock & Roll (#80) by Peter Guralnick, (1971). The last of introductory material and the book that led to many, many others. Guralnick is a foremost scholar.

4. Going to Where Robert Johnson and Skip James Had Gone To. Searching for Robert Johnson (#34) by Peter Guralnick (1989). A slim read that picks up where Palmer leaves off. Fleshes out the Johnson myth as story.

5. Marketing the Delta. Escaping the Delta: Robert Johnson and the Invention of the Blues (#36) by Elijah Wald (2004). The most essential criticism of the blues scholarship to appear. Wald places Johnson in perspective sans the Romantic. Depicts the blues as an invention of record collectors.

6. Listening at the Crossroad. The Road to Robert Johnson: The Genesis and Evolution of the Blues in the Delta from the Late 1800s through 1938 (#35) by Edward Komara (2007). Co Author Komera tries to fill in the blanks between Johnson's life and death while introducing the reader to the material Johnson drew from.

7. Knocking on Doors and Talking to People. Chasin' that Devil Music: Searching for the Blues (#40) by Gayle Dean Wardlow (1994). Wardlow was one of the record collectors instrumental in defining "the blues."

8. Hearing His Own Voice. Can't Be Satisfied: The Life and Times of Muddy Waters (#48) by Robert Gordon (2002). McKinley Morganfield was the first towering figure of electrified, Chicago blues. This is where the Rolling Stones came from.

9. The Scariest, Most Deliciously Frightening Bit of Male Testosterone. Moanin' at Midnight: The Life and Times of Wowlin' Wolf (#54) by James Segrest & Mark Hoffman (2005). Chester Burnett, a violent, seductive world unto himself. With Willie Dixon, this is where Led Zeppelin came from.

10. The Blues Folk Who Stayed. Blues From the Delta (#78) by William Ferris (1978). Not all Mississippi Delta inhabitants went north. This is the story of the ones who stayed. Contains a warm and informative profile of James "Son" Thomas."

I have two additional suggestions that were beyond the author's inclusion criteria for the present volume. Amanda Petrusich's Do Not Sell At Any Price: The Wild, Obsessive Hunt For The World's Rarest 78 Rpm Records (Scribner, 2014) and Steve Cushing's Pioneers Of The Blues Revival University of Illinois Press, 2014). These books throw light on the mostly white record collectors most instrumental in bringing the blues to national and international attention.

Komera and Johnson's specialized bibliography is something I wish I had at my disposal 40 years ago when I started my journey into the heart of blues and jazz. It is a perfect place to start with keenly written essays on the foremost blues scholarship existing today.