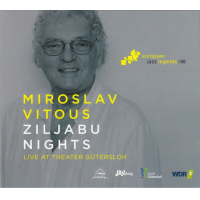 This live album celebrates the 8th edition of the German record label's European Jazz Legends series, culminating in a book to be published in 2018. And each album is finalized with an interview track. So, it would make sense that eminent Czech bassist and co-founder of Weather Report, Miroslav Vitous would be included in the progression of this series. Other than drummer Roberto Gatto, the quintet comprises the same personnel who appeared on the successful Music of Weather Report (ECM, 2016), featuring the dual drumming attack of free/ progressive jazz stalwarts, Nasheet Waits and Gerald Cleaver. Thus, Vitous injects similarities of vintage Weather Report amid these supple and blossoming theme-constructions, tinged with keyboardist Aydin Esen's use of synths, e-piano voicings and textural treatments

Vitous' craftsmanship and insight that helped develop the early Weather Report sound is subliminally transferred into this band's chemistry along with elevated dreamscapes, shrewd use of space, and a few trippy jazz fusion-type intervals. Many of these works are sketched with ascending narratives, elongated melodies and tantalizing passages, countered by the saxophonists' flirtatious phrasings or brazen call and response encounters. Meanwhile, Vitous' signature style is in full throttle, partly due to his melding of slippery, wah-wah lines that spawn an added dimension to the group's distinct inner-workings and signature sound.

"Ziljabe" is spiced with Esen's haunting Moog notes, leading to the band's slanted detours and full-blown aerial assaults. But Vitous shapes late bassist Scott LaFaro (Bill Evans) "Gloria's Step Variations" into a subtle, mood-evoking solo vehicle. And the quintet has some fun by reinventing the familiar theme of "Stella By Starlight" on "Stella By Starlight Variations," marked by Esen's crisply executed Fender Rhodes work and the leader's dense, arco patterns. Other movements are highlighted by weaving sax parts, alterations of pitch, lightly grooving bop motifs and a whole lot of feisty improvisational segments along with some quieter moments.

The musicians project a multidimensional musical environment that jubilantly endures repeated listens. There are many intricacies and shadings throughout the program, finalized by a probing and lighthearted interview with the leader who discusses his early work with flutist Herbie Mann; several humorous anecdotes, and insight into his musical beginnings. (Strongly recommended...)