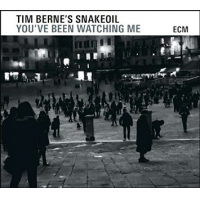 In the course of his long and prolific career, alto saxophonist/composer Tim Berne has been more of a musical agitator than a mediator. While that's a positive characteristic of Berne's creative process, it is also a demanding one for all concerned. Berne's tenure with ECM, however, has been marked by a more pronounced move toward balancing restorative musical properties to juxtapose very complex structures. The result of Berne's continued growth is You've Been Watching Me, a high point of his compositional achievements to date.

As on his two previous ECM leader dates with Snakeoil—the self-titled debut (2012) and Shadow Man (2013)—Berne's cohort includes Oscar Noriega on clarinets, Matt Mitchell on piano and Ches Smith on various and sundry percussion. An addition to the original quartet is guitarist Ryan Ferreira. The Eastman School of Music graduate adds an ethereal, liquid quality that belies his early heavy-metal influences.

"Lost In Redding" opens with all hands on deck, creating a carnival-like atmosphere before abruptly switching gears and turning the proceedings over to Noriega. His bass clarinet solo alternates between single tones and more musical structures, eventually giving way to a series of solos from the rest of the group. Mitchell's keys are augmented by Smith's light but decisive propulsion providing the transition to the reeds retaking the piece, slowly building back to the calamitous level of the opening. "Small World In A Small Town" may be most ambitious composition Berne has created. Beginning as a duet between Berne and Mitchell, the slow pace allows the articulation to stand out clearly. Taking on suite-like qualities, Noriega (at almost ten-minutes in) adds lyrical, classically influenced themes then almost imperceptibly shifts to a subtle Middle-Eastern melody accompanied by a rock beat as the reeds patiently build to a crescendo. The scope of the piece is epic; the music mesmerizing.

"Embraceable Me" and "Angles" are darker in tone, the former beginning as a deep, rumbly free-for-all that is both cinematic and discordant but taking a haunting turn that carries over to the dark, foreboding "Angles." Ghostly intensity and unbalanced harmonies give an aesthetic tension to the music; Ferreira and Mitchell often conjuring color and texture just out of obvious earshot. The set concludes with "False Impressions" and—like "Small World In A Small Town"—changing themes, tempos and modulation create a labyrinth of movements.

Produced and mixed by ECM label-mate and past colleague, guitarist David Torn, You've Been Watching Me represents another forward-looking development for Berne and Snakeoil. The quintet works in various breakout formations adding to the variety of textures and sounds. There's an openness in this setting that adds depth and drama to the improvisations that weave through the arrangements. Berne's music has never been anything less than challenging, but here it is broader and more accessible without sacrificing edginess; You've Been Watching Me is a major achievement in Berne's portfolio.

Lost In Redding; Small World In A Small Town; Embraceable Me; Angles; You've Been Watching Me; Semi-Self Detached; False Impressions.