Home » Jazz Articles » Kneebody: You Can Have Your Moment

By Troy Collins
August 7, 2010
Sign in to view read count 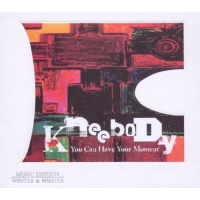 Following in the wake of Twelve Songs by Charles Ives, a 2009 collaboration with avant-garde vocalist Theo Bleckmann, You Can Have Your Moment is Kneebody's second album for the enterprising German label Winter & Winter, and the quintet's fourth full-length release since its self-titled 2005 debut on Greenleaf records. Similar to the band's sophomore effort, Low Electrical Worker (Colortone Media, 2007), this heavily amplified session finds the young ensemble delving further into electronic territory, eschewing the partially acoustic instrumentation of previous endeavors for a more plugged-in sound.

Continuing to explore a variety of genres, the five members of Kneebody juxtapose the fractured rhythms and tempos of M-Base funk, the impressionistic palette of chamber-pop, and the cool futurism of post-rock into a cohesive fusion of styles. Syncopated rhythms, shifting time signatures and contrapuntal harmonies underpin the cantilevered foundations of the group's sophisticated writing, bolstered by a straightforward melodic sensibility that values soulfulness over virtuosity.

The kaleidoscopic array of Fender Rhodes patterns that underscore "Call" are indicative of the former—a testament to keyboardist Adam Benjamin's creative talents, honed as a regular member of Dave Douglas' Keystone sextet. The congenial interplay that introduces "High Noon" spotlights the bond between saxophonist Ben Wendel and trumpeter Shane Endsley, whose emotive horns spar and feint with impetuous fervor. Bassist Kaveh Rastegar and drummer Nate Wood infuse labyrinthine forms with graceful aplomb, providing stalwart focus to an array of approaches, from the fractious intervals of the angular "Nerd Mountain" to the rubato ebb-and-flow of the ethereal tone poem "The Entrepreneur."

Brief and to the point, none of the twelve tunes break the seven minute mark, with many half that duration. Individual solos are brief and thematically driven—models of economy and compositional foresight. On "The Blind," the quintet works in opposition to the pithy metric grooves it excels at, patiently developing a heartrending theme that expands to anthemic proportions in under four minutes—a miniature-pop symphony in all but name. From the metallic grind of "Teddy Ruxpin" to the opulent balladry of "Desperation Station," Kneebody has found a viable middle ground between the emotional accessibility of popular music and the cerebral heights of free improvisation. You Can Have Your Moment offers listeners a chance to have their own.